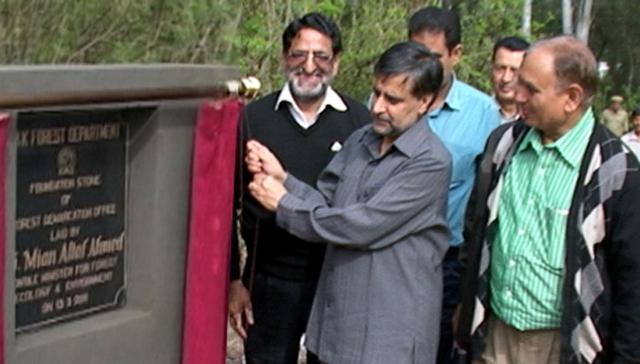 , March 13 (Scoop News) –  The Minister for and Environment Mian Altaf Ahmad has warned land mafia and smugglers against the encroachment on the forest land and vandalizing of the state’s green gold. He said that all forest land under illegal occupation would be retrieved and restored by carrying out massive afforestation.

The Minister who visited Roop Nagar area to oversee the eviction of 60 kanals of forest land at Roop Nagar Jammu today, asked the officers to be tough against the encroachers and smugglers who are out to destroy the green reserves of the state for their petty gains. .

Earlier, the Minister laid foundation of forest demarcation office at Sidrah, which would be completed at a cost of Rs. 15 lakh in the 1st phase.

Altaf appealed the people to keep vigil on the encroachers and ensure that the forest land is not encroached by any one. He said mankind has played havoc with environment by ruthless cutting of trees and encroachment of forest land. He said the greed of the people is increasing day by day which has led to devastation of eco-system and urged the people to desist from   mindless feeling of the trees.

The Minister inspected the ongoing protection and fencing works with RCC toe wall   being raised in forest land of the Roop Nagar. The Minister was informed that the works are being executed under CAMPA funds and 13th Finance Commission grants. Against the targets of 21500 running feet fencing, 17000 running feet has already been completed and the work is in   full swing.

The Minister directed the officers to work with zeal and dedication to protect the green wealth which the nature has bestowed upon our State in abidance.

The Minister appreciated the efforts of the department functionaries and asked them to complete their targets. He further directed them to resist every attempt of forest encroachments and no laxity on their part shall be tolerated.