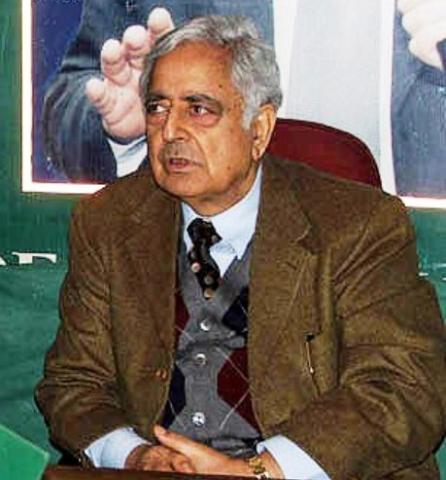 May 14 ::: , May 14(Scoop News) –Peoples Democratic Party (PDP) patron Mufti Mohammed Sayeed has said the opening up of Jammu & Kashmir to outside world through traditional routes which is an important feature of self rule framework has emerged as a cornerstone of resolution process. Addressing a workers meeting at Gulgam in Kupwara district today he said the process that began with a ceasefire on LOC in 2003 and received a boost in 2005 with the opening of – Muzaffarabad and Poonch Rawalakote routes has already had a positive impact on life in border areas of the state. “As this process is carried forward its immense benefits can transform not just the economy of the state but the entire political and strategic situation in this part of the world”, he said.

Mufti said the strategic location of Jammu & Kashmir is an asset that unfortunately has in the past worked against its interests and the state is now reduced mainly into a security concern without its people being allowed to harness the benefits of its privileged position between South and . He said in the aftermath of the partition the state landed in very difficult times with all its traditional routes providing trade and cultural links suddenly cut off and an atmosphere of siege gripped the entire territory. He said we want this siege lifted without or having to make compromises on their sovereignty or territorial integrity. This he said was actually happening as the trends in Indo- pak dialogue in resolution would suggest. “The historic steps taken in 2003 are the ones on which the future of Jammu & Kashmir and this whole region in going to be built through free trade and travel”, he said. Mufti added that the idea of free trade zone had already taken off and would need now to be taken to its logical conclusion through institutionalization of trade and hassle free travel.

Mufti said the people of Jammu & Kashmir would have to put up a strong democratic expression to be able to count in the emerging federal system in the country. “The voice that emerges from our legislature will have to acquire more weight and credibility through free democratic exercise to  be respected and I don’t see any reason why it should not happen if a party like PDP receives a popular mandate after it has established itself as an authentic voice of people”. He said there are serious issues between the state and centre that need to be resolved to uphold the rights of the people of this state which acceded to country in very challenging circumstances. Self rule vision provides for these issues whether they relate to the empowerment of the people or the rights of the state over its natural resources, he said.

Mufti said it was a travesty that the Jammu & Kashmir was still reeling under darkness when its water resources were harnessed to benefit other areas. He said it is unfair that our most feasible power projects have been handed over to NHPC by the successive NC governments in order to stay in power. He said it was crucial for the economic self reliance of the state that it is compensated for every unit of electricity generated from its waters. He said on the one hand the present government has reduced power supply to the consumers across the state and on the other the tariff has been increased three fold in the last three years. He asked the PDP cadres to create awareness among the people about these issues that touch the skin of every citizen of the state.