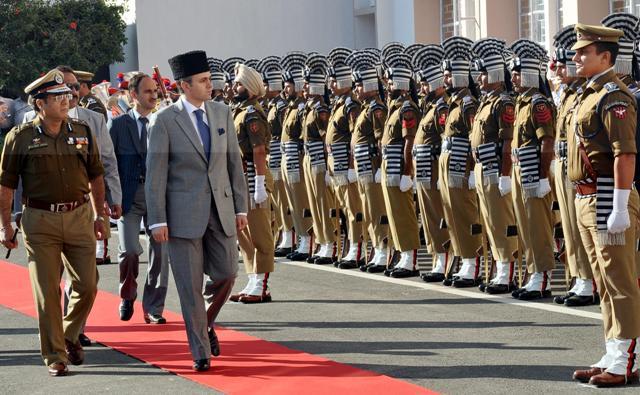 Sheeri (Baramulla)/Srinagar, January 13 (Scoop News) – J&K Chief Minister, Omar Abdullah said the Jammu and Kashmir Police is an organized and disciplined force and has worked like a bridge between the government and the people during the recent unrest period in the valley.

The Chief Minister was addressing at Passing Out Parade function held at Sheeri Baramulla, here today.

Hoping that the pass out police personnel from Sheeri Training College would not only exercise minimum use of force while maintaining law and order but would also respect the Human Rights like a civilized force,Omar Abdullah said that these Police personnel will faithfully perform their duties and will held the flags of country and the state high adding that the pass out contingent of police will utilize their expertise in right perspective. He said Police is the only force in the country which has to fight on many fronts like militancy, stone pelting, traffic pressure and also against the crimes.

He said the situation in the valley is improving fast and thousands of youth thronged Khanyar in downtown area for on-spot recruitment drive yesterday and said “I also personally went to Zaina Kadal to inaugurate Shahi Hamdan Community Centre which is a positive step which was some years ago impossible”.  Omar said but unfortunately some people see it with doubtful eyes and are out to destabilize the situation.

Reiterating his commitment of ushering the state to new heights of the development,  Omar said that the government will leave no stone unturned to ensure equitable development of all the areas of the state.

Complimenting the pass out police personnel, the Chief Minister assured them that government would provide all possible assistance to them adding that hardship allowance has already been sanctioned in their favour.

Earlier, the Chief Minister inspected the parade and took salute at the march past. He also distributed awards among the pass out Police personnel.