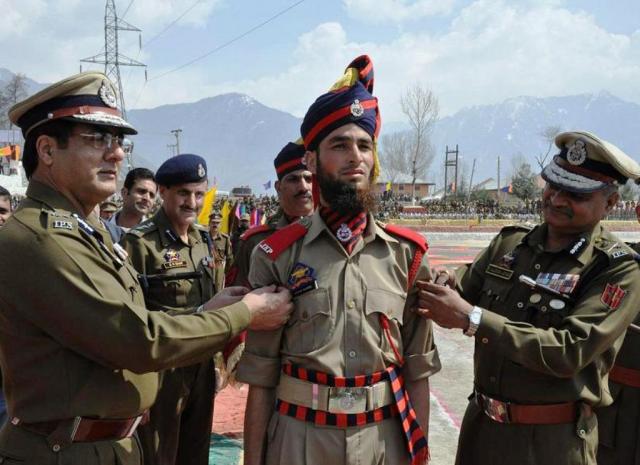 , March 18 (Scoop News) –   Director General of Police (DGP),  Kuldeep Khoda said that Police has remained on fore front for the safety of people of the State. The force has exhibited its professionalism and discipline not only in normalcy but also in the disturbed times.

This was disclosed by the Director General of police (DGP)  Kuldeep Khoda while addressing the jawans at the Attestation cum passing Out Parade held here today at , Manigam, Ganderbal. He said that the services rendered by the personnel of Police in curbing militancy and anti-social elements in the State can not be forgotten. He further said that the Organization is focusing on the best training skills in the view of the changing scenario and has procured non-lethal weapons and body protectors. He said the jawans are being trained in all Police Training Institutions across the State to use these weapons in order to ensure least causalities during violent mobs, he added.

Stressing upon the out going jawans to devote themselves for the services of the society and protection of integrity and unity of the nation,  Khoda said the Police has all along offered a helping hand to the needy people in the times of natural calamities or disasters.

Earlier, the Director General took salute at the colorful Passing out Parade and inspected the march past of contingents of trainees.  Khoda asked recruits to translate the pledge, they have taken today in letter and spirit while performing their day-to-day professional work.

Referring to the welfare measures taken for the betterment of the Jawans,  Khoda said that a comprehensive welfare programmes has been formulated for providing quality education to the wards of the personnel particularly the children of the myrters and said a number of initiatives have already been taken recently  in the State level Police Welfare Committee meeting. He said four more Police Public Schools have been opened in the State at district headquarters viz Leh, Kargil, Anantnag Batamulla and two more will be opened at Rajouri and  Doda shortly He said that several decisions were taken to benefit the serving/retired personnel and families of martyrs. He further said that two Police Housing  Colonies each at and would be established very soon.

The DGP said that the services of 29 SPOs belong to various districts of Kashmir Zone have been converted and absorbed as Constables in the organization for their exemplary services while 9 Constables have been given out of turn promotions for their dedication and bravery of saving precious lives during anti-militancy operations and ensure no collateral damage of the people.