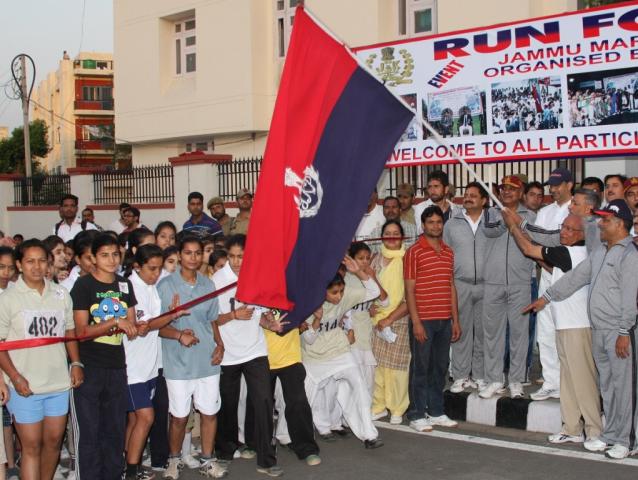 Jammu,April 22 (Scoop News) –Thousands of men, women and children from 5 to 85 years of age participated in the Marathon “Run for Fun”, organized by Jammu and Kashmir Police under its Civic Action Programme in Jammu city this morning. The first ever such a largely participated Marathon was held for the first time in city.

Minister of State for Home,  Nasir Aslam Wani flagged off the Run from Police Sports Stadium, Gulshan Ground in the wee hours. The culminated back at the Venue after passing through various routes in the city. People profusely chairing them while passing through the routes.

The flag off ceremony for different categories of the Run started at 5 a.m. People from different parts of the city had thronged the venue to participate in the . More than 15,000 athletics including students from different educational institutions, sports bodies, police personnel, para-military personnel, small children, members of chamber of commerce, civil society, club, Jammu Bar association, media persons and senior citizens joined the Run.

On the culmination of Run, 33 winners from all categories were awarded cash prizes and certificate of participation by the Director General of Police, who was the Chief Guest at the concluding function. Prize winners of the who got first position in different categories include  Tanvir Ahmed,  Ghulam Mohammad, Ms. Ifra Anjum and  Renku Kumar.

On the occasion, the Director General of Police (DGP),  Kuldeep Khoda addressed the gathering and said that the JKP has organized various sports events during the winter under its Civic Action Programme and the people particularly the youth have shown much interest in these events. The aim behind organizing sports events is to develop police public coordination and strengthen their relation with the people. He said that such events help to channelize the energy of the youth towards right direction and hone their talent. He reiterated that the police organization would continue its efforts to inspire the youth of the state towards sports and for this purpose such events would be held in future also.  He thanked the people particularly the youth for their participation in the and said that huge participation of the people has encouraged police organization to conduct such events.

Appreciating the efforts of Additional Director General of Police, Armed/Law & Order,  K. Rajendra Kumar and members of organising committee for organizing the event in a befitting manner, the DGP said that the officers put great efforts and ensured large participation of athletes from all shades of life. He said that due to the support and cooperation of sports bodies, educational institutions and other organizations, the event was concluded successfully. He also appreciated the arrangements made by the Traffic Police on the routes of the .