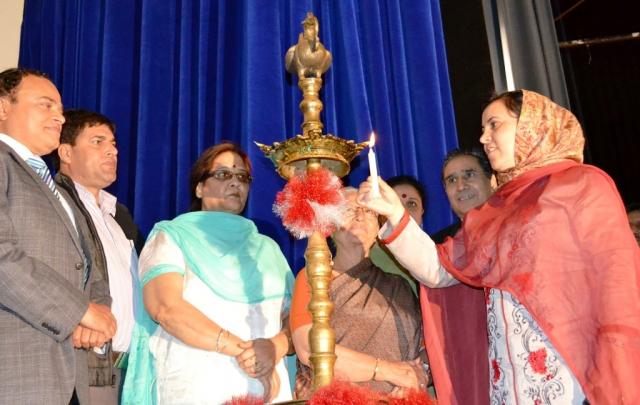 Chairman Social Welfare Board, Khem Lata Wakhlu presided over the function while Commissioner/Secretary Social Welfare Jeet Lal Gupta was the guest of honour.

Speaking on the occasion, Ms Sakina Itoo threw light light on some important issues faced by the Women in present day and stressed on the need of attitudinal change in the mindset of the people particularly women who take less interest in decision making even at home and remain dependent for petty issues. She gave reference of a poem written by Prof. Reta Jetindera and elaborated that without woman, survival of mankind will almost become impossible. She asked the women to participate whole heartedly in decision making which is imperative for well being of a society. “Charity begins at home, first of all, the women should stop differentiating between a daughter and a son and stop killing of a girl in their womb”, she asserted.

The Minister appealed the NGOs of the state to come forward and help in effective implementation of schemes of Govt. of India and Central Social Welfare Board for the upliftment of women particularly in far flung villages. She suggested launching of massive awareness programmes among women about their rights. The need for creating facilities for education, health, medical care, productive work and share-in politics and governance for women is a must.

Gazanfar Ali, Secretary/Executive Director, Social Welfare Board presented the welcome address. He gave a brief about the schemes dealt by the Board through NGOs and highlighted some notable achievements made by the Board during last two years.

Khem Lata Wakhlu in her address gave thrust on women’s empowerment, curbing violence against women, equal rights to women in every field. She said everyone has the right to education without discrimination on the basis of gender identity. Everyone has the right to productive work, to just and favorable conditions of work and protection against unemployment.

Jeet Lal Gupta, raised two important issues like drastic decline in women sex ratio and women trafficking. He said that these are the issues which have made hurdles in the progress of the State and the Country. He said that the State is third in number when we talk about the decline in the sex ratio. He emphasized need of awareness among the women folk about the matter as they have to play a vital role in this regard.

Indu Pawar and Bimla Luthra stressed on education of the women and said that awareness needs to be created about the rights of the girl child so that the generation to come is well educated and empowered.

Nazir Gurezi praised the State Social Welfare Board for doing good job in organizing such workshops.

Prof. Rita Jitendra said that with the help of agencies like “Social Welfare Board” the women of our state are becoming socially, economically and legally empowered.

Vote of thanks was presented by H.N. Tickoo.

On the occasion, various cultural programmes were presented.