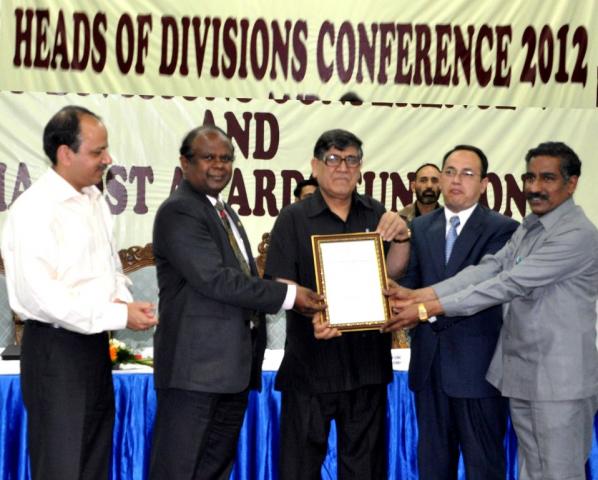 Srinagar, May 17(Scoop News) –The Speaker, Jammu and Kashmir Legislative Assembly , Mohammad Akbar Lone on Thursday distributed postal awards in different capacities among the Postal employees at a “Head of Division Conference 2012 and India Post Awards, function “held at SKICC for their overall performance and achieving the fixed targets within the time frame, besides, upgradation of the facilities at their working Centers. These awards were given in different categories including savings Bank Deposits, Postal Life Insurance, and in Philately etc.

Earlier,while appreciating the department for their efforts in reviving the functioning the Posts Offices and other by introducing the latest facilities to the common people especially in the far-flung areas.  Lone said that they should work to achieve new heights in the postal sector.  He said the Posts offices in the early days had a limited role when there were no transport facilities and the humankind were utilizing the services of the birds for sending communication through them from village to Village, Country to Country and man to man. However, later, the services of a mankind in the shape of Post man were utilized to send the messages to their friends, relatives and other people and for this purpose the postman has to cover a long distance on foot to deliver the important messages and money orders.

The Minister said that now a sea change has come in the Telecommunication sector and with one click, the needed person can get any kind of information required by him within minutes and availability of modern technology.

The Speaker congratulated the award winners and wished them success in future and asked them to go ahead with their mission with full zeal and dedication. He said that despite a revolution has came in the telecommunication centre, we cannot ignore the relevance of the posts offices particularly of their functioning in the far flung areas in delivering the letters and even working a yeoman’s services to the soldiers who are working at borders.

On the occasion, among others the Chief Post Master General Mr John Samuel and Director Postal Services  Ambash Upmanyu.