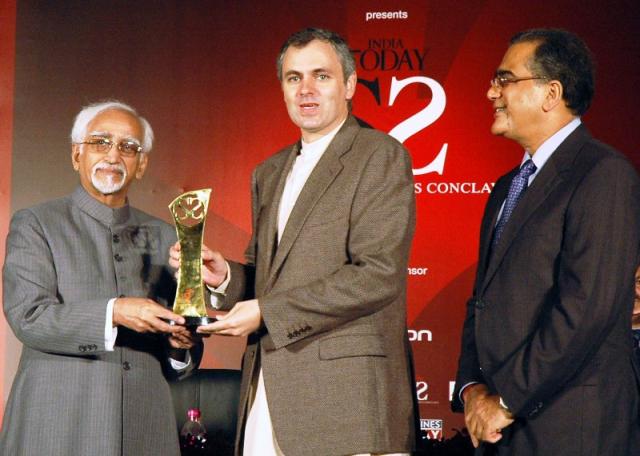 New Delhi/Jammu, November 19 (Scoop News) –A survey conducted by the India Today has indicated that the has shown remarkable improvement in the governance during last two years. As against rank 16 in 2008, jumped to rank 10 in 2010 while it stood at rank 11 in 2009.

This is viewed as an important breakthrough achievement of Omar Abdullah led government in view of the law and order situation during 2009 in the Valley and long drawn disturbances for over five months in during the current year.

The has been adjudged the best State in the Country for successful implementation of schemes in Primary Health Care sector and Mahatama Gandhi National Rural Employment Guarantee Act (MGNREGA).

The State has also been ranked third in Micro Economy, fourth in Primary Education and Investment Environment while it stands at rank sixth in Consumer Markets sector.

The awards for the achievements were received by the Jammu and Kashmir Chief Minister, Omar Abdullah from the Vice President,  Hamid Ansari at the State of at today.

The survey for ranking various states in governance and implementation of development schemes in different sectors was conducted by the India Today Group of Publications.

Giving top ranking to the Jammu and Kashmir State in Primary Health Care sector and MGNREGA implementation, the report issued at the Conclave says that in 2010 the State has targeted an expenditure of Rs. 600 crore under MGNREGA almost three times the last year’s. The Government has been able to generate more than 7.9 lakh mandays for about 2.5 lakh households and spent nearly Rs. 140 crore.

The parameters of ranking good health in the State has been captured by the infant morality rate, the percentage of births assisted by the trained personnel, the number of registered doctors, access to water, good hygiene, removal of biases against women and girl child and per capita expenditure on health and family welfare.

Giving details of the methodology adopted by the survey, the report says that the objective route has been used, relying solely on data from central sources to adjudge the State’s and formulate rankings list so that non-comparability of data across States was not an issue.