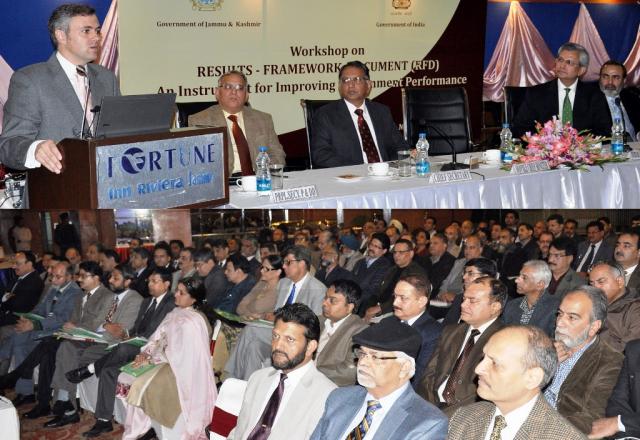 Jammu, December 07(Scoop News) –Chief Minister, Omar Abdullah Friday said that Results-Framework Document (RFD) initiative will be launched this year for entire government in one shot adding that all government departments would be asked to formulate RFDs for last quarter of the current year and for entire next year.

Addressing the two-day workshop on Results-Framework Document (RFD) – An Instrument of Improving Government Performance here this morning, the Chief Minister highlighted the importance of the workshop organized in collaboration with Performance Management Division Cabinet Secretariat Government of India for the Administrative Secretaries and Heads of the Departments to get acquainted with the basics of RFD which has been implemented in ten states of the country so far. Jammu and Kashmir will be the eleventh state to implement RFD this year.

“While elections present evaluation perception of public representatives, there should be performance evaluation of bureaucracy and government departments, and RFD will be right instrument for the same”, he said adding that this initiative would provide mechanism for performance assessment in relation to the delivery of service, realization of targets, completion of schemes in a qualitative manner and the outcomes of the works done.

The Chief Minister said that his government is continuously working for improving the quality of governance at all levels. “We have taken measures like implementation of Public Service Guarantee Act (PSGA) and Right to Information Act (RTI) besides holding Panchayat Elections and transferring vital powers to these institutions”, he said adding that implementation of RFD would be a natural progression in our march towards the goal of good governance and quality public service delivery to the people ensuring benefits of projects reach the people in its right perspective and in a fixed time frame.

“I want to implement RFD in one shot for entire government bringing all departments under its ambit. This type of initiative is all the more essential as we do not possess any subjective way to assess the performance of government departments so far as its work done and target completion is concerned as a whole”, he said adding that the Annual Performance Report (APR) mechanism in vogue presently is for evaluating individual government functionaries but it does not present accurate reflection of the performance of the departments and the officials and officers. He said appraisal should be correct one and comprehensive. “This helps to grow and improve positively”, he said.

Omar Abdullah said that Administrative Secretaries should act as drivers of RFD. “You have to be drivers of the programme. You cannot be driven by Cabinet Secretariat. You can receive basic training, knowledge and timely guidance from the Union Cabinet Secretariat but you have to yourself implement the initiative successfully”, he said adding that there should be no fear in the minds of officers for getting assessed and evaluated under the RFDs as they are capable of performing excellently. He said that learning and working under RFD initiative will improve the performance in all fields. He said that RFD would also provide mechanism for assessing the performance of each ministry and help in regular improvement in the delivery status.

The Chief Minister said that those days are gone when performance was hidden with this perception that after some years it will be forgotten. “You have to put your performance in public domain and that is what transparency demands”, he said.

Chief Secretary, Madhav Lal who has been associated with the RFD formulation at the Centre and has piloted the programme for implementation of RFD in the State under the directions of Chief Minister, Omar Abdullah gave detailed account of the significance of RFD to improve the performance in government departments and ensure qualitative public service delivery.

In his address, on the occasion Madhav Lal said that implementation of RFD would be yet another significant initiative of the State government after implementation of PSGA, RTI and holding of Panchayat Elections besides transferring crucial functions and powers to these institutions.

“We have been discussing RFD and its implementation in the State for quite some time and this is the right time to learn more about this initiative in a workshop as we would be soon formulating next year’s annual budget and plan”, he said adding that the lecture by Secretary Performance Management Division, Cabinet Secretariat Government of India, Dr. Prajapati Trivedi on overview and structure of workshop and international experience and lessons for designing RFDs would prove highly beneficial for the participants.

Secretary Performance Management Division, Dr. Prajapati Trivedi in his address gave detailed account of the structure and overview of the importance of RFDs. He explained various aspects relating to the subject and presented success story of emergence and implementation of RFDs at the Central Government level and in ten states of the country so far. He said that Jammu and Kashmir would be eleventh state to have this initiative for improving the performance.

Trivedi said that when he discussed the initiative with Chief Minister, Omar Abdullah he and his team felt energized and holding of a workshop here for top brass in state administration is result of the meeting he had with the Chief Minister earlier.

Filed under: Media & Tech, World
Share Tweet Pin G Plus Email
previous article: PHP Development and its Boundless Potential in Web Application Development
next article: If iPhone continues to be in the limelight and thrive on its spectacular business opportunities, it