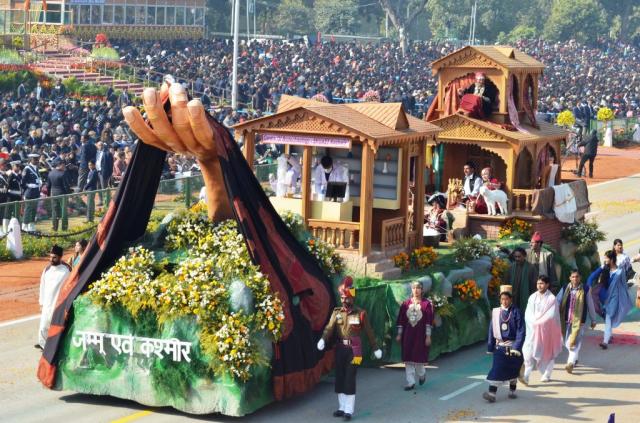 New Delhi,January 27(Scoop News) –  Jammu & Kashmir State Tableau, forming part of the Republic Day Parade at the Raj Path on Saturday, was the centre of interest of a large audience on either side of the Parade route that greeted it with cheers as it drove past. The Tableau was among the 14 selected in a tough completion for this year.

The theme of the Tableau was ‘Blending Tradition with Technology’. It depicted the processes of Pashmina making with special focus on the technological breakthrough achieved by the scientists at of Agricultural Sciences & Technology, by cloning the world’s first Pashmina goat, Noori. The breakthrough has created exciting opportunities that combine tradition and technology.

The Press Trust of India in its news report hailed the Tableau as “One of the interesting concepts…which showcased a unique blend of tradition and technology with world’s first cloned pashmina goat ‘Noori’ and the pashmina-making process.”

A contingent of about two dozen artists from the three regions of the State – , and Ladakh – dressed in colourful traditional costumes walked with the Tableau down the Raj Path while some of them performed on the 45-feet long Tableau.

The Tableau-front displayed a massive embroidered Pashmina shawl passed through a ring. The middle portion showed scientists working in laboratory to clone Noori and artisans performing different processes of shearing, de-haring, spinning yarn on traditional spinning wheels and producing exquisite Pashmina shawls on handlooms. The rear of the Tableau presented a colourful display of finished shawls and buyer-seller activity.

The theme of the Tableau is selected by the State Tableaux Committee headed by the Chief Secretary. Other members of the Committee include Financial Commissioner, Finance, Principal Secretaries, Planning and Home, Commissioner/Secretary, Tourism & Culture, Secretary, General Administration Department and Secretary, J&K Academy of Art, Culture & Languages.

The Tableaux designs submitted by different states are evaluated and approved by an Expert Committee at which includes persons of repute from different fields of art, history, music and theatre. The Committee holds series of meetings over a period of several months during which states make presentation of their themes with models. The Committee shortlists states on the basis of merit of their themes and designs for participation in the Republic Day Parade.