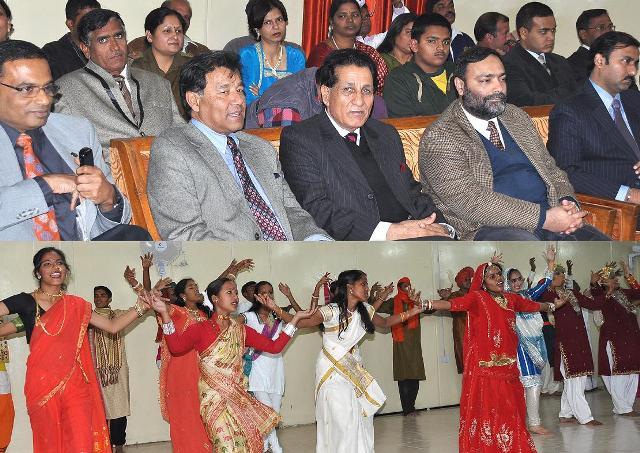 , November 22  (Scoop News) –Minister for Medical Education, Youth Service and Sports,  R.S. Chib has  lauded the role of NCC in nation building, saying that the organization has played exemplary role at times of emergencies and natural disasters and saved many precious lives. The organization is always at the forefront in difficult times to help the needy.

Chib was speaking at the concluding day of 12-day National Integration Camp organized by the State unit of NCC at Nagrota wherein 500 Cadets of 17 States   participated.

The Minister said that efforts should be redoubled at the school and college levels to encourage the youth to participate in the NCC activities in a massive way by highlighting the role of the organization. He impressed upon the authorities to motivate more and more cadets from the rural areas to join   NCC so that maximum population in rural areas could take part in National Integration Camp. Besides, keeping fit and healthy, the NCC also inculcates the sense of responsibility and discipline among the youths to serve the nation selflessly, he maintained.

Participating youth from diverse backgrounds carry the message of mutual brotherhood and composite culture to different parts of the country.

Speaking on the occasion, Vice Chancellor, , Prof. Varun Sahani, said that National Integration camp plays a vital role in unity and integration of the country. He said is a country of diverse cultures where people spoke different languages yet people have great respect for each other. He said Jati na vaid jahan sab ka hai saman jahan.

Brig. T. Geroge also spoke on the occasion and said that aim of organizing such camps is to spread the message of unity and integrity   and encourage the youth to join NCC in a big way. The participants from different parts of the country carry the message of peace and national integration.

Chib appreciated colorful bonanza   presented by the Cadets on the occasion which include folk dance and songs of different States.