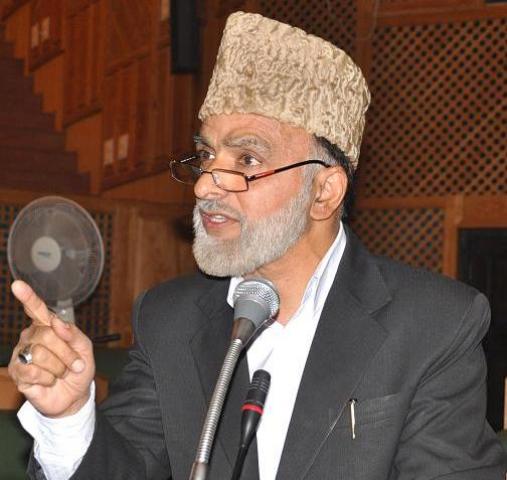 Srinagar, October 07 (Scoop News) – Reiterating that dialogue is the only way to resolve issues, Minister for Law, Justice and Parliamentary Affairs,  Ali Mohammad Sagar has called upon the separatists to come to table for presenting their view point in a democratic way. He said conducive atmosphere is building up for resolving problem, which needs to be capitalized by all stake holders.

Winding up discussion on recent Kashmir unrest’ in Legislative Council, the Minister appealed to people of the valley particularly youth to strengthen the hands of Chief Minister,  Omar Abdullah, who, he said is sincerely facilitating political discourse to address Kashmir problem.

Sagar said Government has initiated confidence building measures for which public support was necessary to sustain them. He said release of 50 youth, removal of 16 bunkers and constitution of committee to review Public Safety Act cases and identification of areas for taking out of Disturbed Areas Act, are steps in right direction.

Asserting that forces instigating violence are destined to be defeated, he said that their game plan of destabilizing the Government would never succeed. He said these people are actual enemies of and its people, as they have stooped too low to further their political agenda. He said these forces neither possess sympathy nor have any concern for public welfare. He said politicking on dead bodies is their old habit.

Stating that Kashmir is an issue craving for solution, he said that the Chief Minister, has already conveyed to the Prime Minister of India, Dr. Manmohan Singh and other appropriate forums that political initiative has to be taken to address Kashmir problem permanently. He said Union Home Minister, has also remarked that is a unique problem requiring unique solution in the highest legislative forum of parliament.

Sagar said that Government has been concerned since the very inception of turmoil in April this year and tried to tackle it by different democratic means. He said how could Government be happy when its citizens lose their lives, adding that such incidents bring embarrassment only. He said that Government has got lodged 19 FIRs in different police stations against the human right violations and ordered Commission of Inquiry comprising (Retd) Justice,  Bashir-ud-Din and  Nargotra to inquire into incidents of HR abuses so that offenders are brought to book.

The Minister appreciated the Central Government for convening All Party Delegation Meet to evolve a policy for dealing with the turmoil and restore normalcy. He said the visit of APD to did play positive role for bringing peace and tranquility. He said opportunist PDP again resorted to politicking and issued conflicting statements to fuel unrest. He said the party in a vain attempt issued a statement, terming that APD’s visit to the valley as a futile exercise, and minced no words in welcoming 8-point package announced by the Centre. He said their leaders are talking to Home Minister on telephone but stay away from meeting them in just to hoodwink people and conceal their dubious character.

The Minister said that Chief Minister’s sincere approach has brought a constructive change in the entire Indian political spectrum, which would go a long way in addressing problem. This, he, said needs whole-hearted public support and positive overtures from one and all to build upon the emerging scenario.