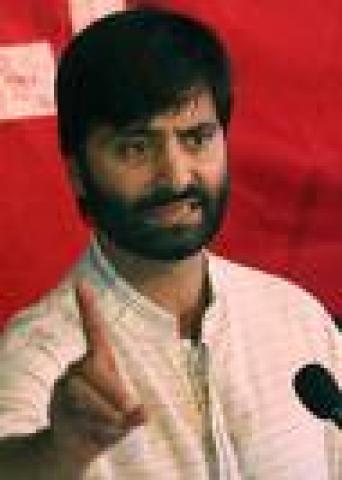 (As reported in a pakistan news), the Jammu and Kashmir Liberation Front (JKLF) chairman Mohammad Yasin Malik will soon marry a Pakistani national. The engagement ceremony took place in Islamabad without him, as he is in jail.

The 36-year-old Malik’s fiancee is Mashaal Malik, a painter. Three of his friends attended the ceremony on his behalf. Mr. Malik’s confidant and senior JKLF leader in Pakistan, Saleem Haroon, confirmed the event.

“Yes, the engagement took place in Islamabad at a simple ceremony” he told The Hindu over phone. Mr. Haroon said the event was actually slated for October 27 and Mr. Malik was to have himself attended it but he was arrested a few days back and the families decided to advance it. Ms. Mashaal’s brother was present on the occasion.
Date not yet fixed

No date has been fixed for the marriage ceremony as it would depend on Mr. Malik’s release.

Ms. Mashaal is the daughter of a Pakistan defence officer who passed away a few years back. Mr. Malik reportedly met her first in London and then in Pakistan. She hails from Karachi.

Mr. Malik is the third separatist leader to choose a foreign bride. Earlier the Hurriyat Conference chairman Mirwaiz Umar Farooq married Sheeba Masoodi, a U.S. citizen. She is, however, born to Kashmiri parents. She was recently asked to leave the country for being a U.S. citizen. The Jammu and Kashmir High Court later stayed the deportation order.People’s Conference chairman Sajjad Gani Lone also married the JKLF chairman Amanullah Khan’s daughter Asma Khan at a highly publicised ceremony in Islamabad in 2000.He is also facing temporary separation as the Government of India has refused visa to Asma and their twin sons for the past nine months.