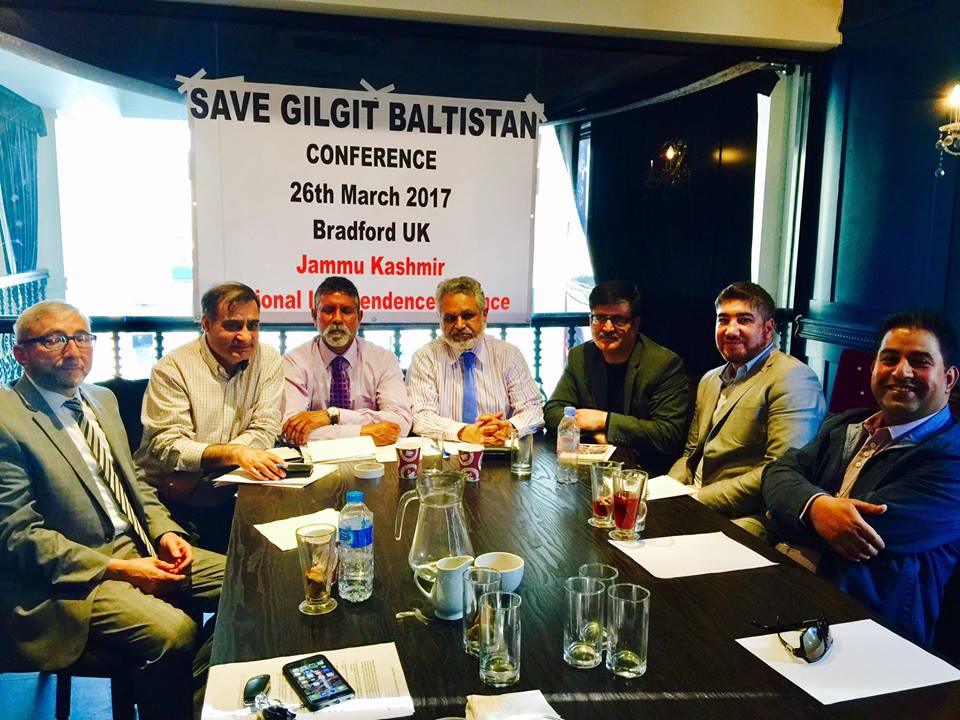 Jammu Kashmir Independence Alliance (JKNIA) has organised a conference in Bradford UK on 26th March 2017 chaired by Mahmood Kashmiri, chairman JKNIA. The members of all the pro-independence parties and civil society activists from Kashmiri Diaspora actively involved in the Kashmir independence struggle attended the conference and agreed on a comprehensive political and diplomatic plan of action to save Gilgit-Baltistan from becoming a province of Pakistan. Furthermore, they agreed to launch “Save Gilgit-Baltistan Campaign” and issued JKNIA – Save Gilgit-Baltistan Conference Declaration.

Ch. Ghulam Hussain, Secretary General JKNIA in a briefing to media announced the key decisions taken by the participants of the conference. He said that all the members of JKNIA and civil society activists are committed to continuing the struggle for the broader objective of achieving United and independent Kashmir where the people of Kashmir will be able to determine their future through a fair and free referendum on a permanent basis in a free environment.

We, the undersigned representative of the member organisations of the Jammu Kashmir National Independence Alliance (JKNIA), civil society, human rights activists and members of the Jammu Kashmir diaspora community resolved to extend our complete support and solidarity with the people of Gilgit Baltistan in particular and to the people of all other regions of Jammu and Kashmir in their struggle for protection of fundamental human rights, good governance and independence.

We are disappointed and concerned that the Government of Pakistan and China has not initiated any dialogue or engagement with the Government of AJK and Gilgit-Baltistan on the future of China-Pakistan Economic Corridor which will run through these two regions of the J&K State. 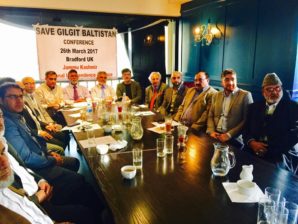 Participants of Save Gilgit Baltiatan Conference

The Government of Pakistan continues to employ colonial practices towards the people of Gilgit Baltistan. A Recent statement by Pakistan’s minister for Inter-provincial Coordination Riaz Hussain Pirzada on March 15 that the committee headed by Sartaj Aziz had recommended making Gilgit and Baltistan as its 5th province is a violation of UN Security Council and UNCIP resolutions on Jammu and Kashmir in general and with regards to Pakistan’s responsibilities under UNCIP resolutions on Gilgit-Baltistan and AJK in particular.

The International community and the European Union, in particular, has urged Pakistan to revisit its policies viz-a-viz Gilgit-Baltistan and AJK in the EU Committee on Foreign Affairs Report (A6-0158/2007) – Kashmir: Present Situation and Future Prospects.

We the members of JKNIA and the people of Gilgit-Baltistan and Azad Jammu Kashmir consider the existing governance arrangements under the Karachi Agreement of 28 April 1949 between our region and Pakistan as a draconian colonial mechanism of subjugation and control. We unequivocally reject and oppose the terms and conditions of Karachi Agreement agreed under duress and imposed upon our people by Pakistan. We actively seeking new governance and power sharing arrangements between AJK and Gilgit Baltistan for self-governance as well as economic, natural resource management and international trade and investment agreements with all nations.

We want to convey our deepest anguish and we unequivocally condemn the lack of sensitivity and prudence shown by the Government of Pakistan thus far in the devolution of powers to Gilgit-Baltistan Assembly and empowerment of participatory system of governance in the region.

We ask the Government of Pakistan to;

[1]The Jammu Kashmir National Independence Alliance (JKNIA) is an umbrella alliance of Kashmiri Political Parties and Civil society organisations based in U.K.