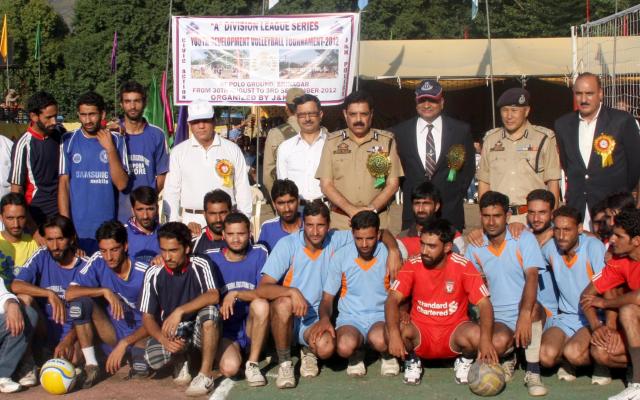 Srinagar, September 3 (Scoop News) -Additional Director General of Police Armed / law and order (ADGP), K. Rajendra Kumar has said that Jammu and Kashmir Police, under its civic action programme has been organizing various sports activities for the promotion of sports culture in the state. He said that sports help to give a right direction to the energetic youth and creates discipline among them.

The Director General of Police, Ashok Prasad was the Chief Guest at the closing ceremony of ‘A’ Division Super League Youth Development Volleyball Tournament-2012 at Polo Ground here this evening. The tournament was organized by Jammu and Kashmir Police under its Civic Action Programme in which various volleyball teams of the valley participated.

While speaking, the ADGP said that youth are a valuable asset of the nation who needs a peaceful and congenial atmosphere to nurture their abilities and J&K Police, besides its professional duties has been providing opportunities to the youth by organizing such tournaments so that they could excel their talent. He said that the activities have also encouraged the youth to prepare themselves for state level, national competitions.

Rajendra said that JKP has always remained on forefront to help the youth in refining their talent and various activities including cultural and sports activities are organized under civic action programme to inspire the youth for their active participation in such activities. The organization under the programme is providing succor to the youth of far-flung areas and also provides assistance to various sports bodies to promote their activities in the arena.

The final match of the tournament was played between Royal Club Aglar and Volleyball Club Chinad.

Volleyball Club Chinad lifted the trophy after defeating his opponent by 3-1. Mementos, trophies and cash prizes were distributed among the teams by the ADGP.