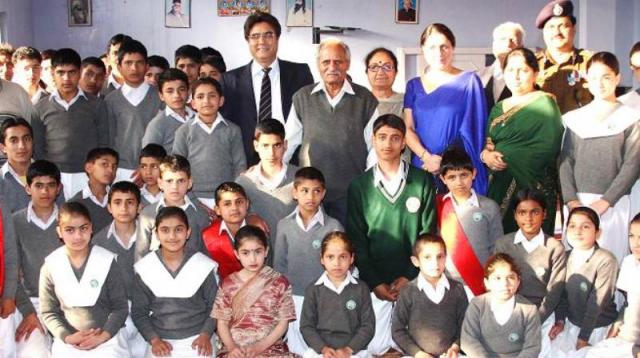 Jammu, March 08 (Scoop News) –,Director general of J&K Police Kuldeep Khoda stressed upon all sections of the society to come forward to provide a helping hand to the ignored and needy people. He said due to unfortunate events of past two decades a crop of orphans has come up in the State. He said that it is responsibility of the society to take care of the orphans who are also a part of the society. He said that people have realized their responsibilities towards the helpless people and many NGOs are coming forward to establish schools for such children and J&K Police is always ready to provide assistance to these NGOs in this noble service.

He donated items worth Rs. 1.35 lakhs to Balika Niketan Orphanage at a function held today. The assistance has been granted by the Police Organization under its Civic Action Programme.

Speaking on the occasion, the DGP said that Jammu and |Kashmir Police, apart from its professional duties, is also sensitive to its social responsibilities and the Organization has under taken a Civic Action Programme to fulfil these responsibilities. He said that under this programme the department has a wide spectrum of activities which include organizing sports events, medical camps, financial assistance to orphanages and destitutes’ homes, distribution of study material and construction of mini stadia. He said that Police has started a de-addiction centre at to treat hundreds of victims of drug addiction and it has succeeded in bringing many patients to their normal life.

The DGP lauded the role of management of the institution for running such noble service and stressed upon them to lay more emphasis on all round development of the children to cultivate sense of determination in them so that they are able to stand upon their own feet in future. He also stressed upon the orphanage management to make best use of the assistance and donations received from Government and the people.

Giving details,  Khoda said that items donated to the institution include 20 beds with 20 mattresses, 10 chairs, 10 tables, 20 steel almirahs and an inverter. He announced that a computer lab would be set up at the orphanage by the J&K Police within a week’s time to impart computer skills to the inmates.

The Chairperson, Police Wives Welfare Association, (JKPWWA) Dr. Indu Khoda, who was also present on the occasion appreciated the role of orphanage management and gave valuable suggestions for smooth running of the orphanage. She also interacted with the children and enquired from them about the facilities available in the institution. She asked them to be dedicated students as the future of society is linked with them.

Concluding the function, the President of the orphanage,  R. C. Gupta thanked the DGP and Chairperson JKPWWA for the assistance provided to the orphanage. He said that assistance would help the institution to further improve upon its facilities to the children.

Earlier, the inmates of the orphanage presented a cultural show which was liked by the audience.