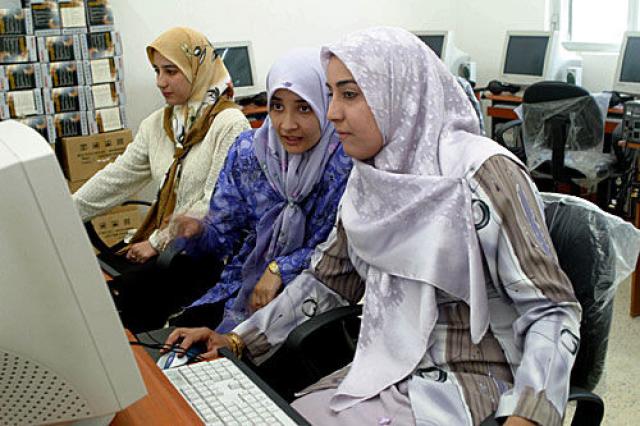 Lack of opportunities and growing conservatism prompts many to contemplate emigration.

Sahar and Alia, both aged 25 and college graduates, said they have been looking for government jobs for three years.

Civil service employment is often the only option for educated young women in Baghdad, as private enterprise is stalled and government jobs offer security and short working hours.

“We’ve applied for different ministries, even those that are not related to our specialisms,” said Ali. “We’re prepared to be adaptable to get a job – but we’re still waiting.”

Young, university-educated women interviewed by IWPR, who did not want their real names used, say it is often difficult to find work after graduation, leaving them feeling hopeless and financially dependent on their families.

Jenan Mubarak, director of the Iraqi Centre for Women’s Rehabilitation and Employment, works with female students at universities in the capital. She said they “seem lost and pessimistic” because of the uncertainty in Iraq.

“They don’t know what will happen to them tomorrow,” said Mubarak. “They have no hope in the future because they don’t have work or job openings, and they’ve missed the opportunity to get married.”

Many young women have little hope that things will improve and speak about “fleeing Iraq”, noted Mubarak.

Manar, a 25-year-old woman with a master’s degree in English literature, struggled through her studies with the hope that she could become a university lecturer after graduation.

It looked as though she might achieve her ambition, but she’s now facing a frustrating wait for an opening.

Many Iraqi lecturers – particularly those who teach English – were the target of militants and fled the country over the past five years.

The shortage of lecturers has undermined university education and left administrators scrambling to fill vacancies. As a result, many recent graduate students have been handed teaching posts they otherwise would not have had a chance of securing.

With so few English-language specialists, Manar said she was “shocked when they told me I had to wait because there wasn’t a place for me in the department”.

“I won’t wait forever,” she said. “I will try to find another job in any other country … My country has turned its back on me. It is a pity.”

There are no accurate unemployment figures for Iraq, but it is widely recognised as one of the most crucial issues affecting youth. Minister of Labour and Social Affairs Mahmoud Al-Sheikh Radhi pledged to make reducing unemployment a priority in 2008.

The hurdles young women face are not only related to finances and job opportunities, experts maintain. They say conflict and sectarianism has polarised society, which has deeply affected young women.

Many are now unwilling to marry outside of their sects or neighbourhoods, and they often remain at home with their parents.

"The cultural, social and economic progress made by women is slipping away because of the security situation and fear,” said Mubarak.

Azhar al-Sharbaf, a legal consultant at the ministry of women’s affairs, said she is concerned that young women are suffering fear and depression as a result of their diminishing freedoms and opportunities.

Rising religious and political conservatism “engulf Iraq”, she said, and “there is no hope of any change or improvement”.

Sharbaf and Mubarak agreed that the lack of opportunities and high levels of depression are not unique to young women, maintaining that the government largely neglects the needs of Iraq’s youth in general.

Mubarak said both civil society organisations and the government need to improve prospects for young people as a whole. But she put most of the responsibility on the government, saying it “needs to do a better job of looking out for its youth”.

There’s a pressing need for action otherwise the country risks losing some of its brightest, most able citizens through emigration – something it can ill-afford, say experts.

In addition to taking practical steps such as job-creation programmes, they say the government must raise levels of optimism amongst young people, whom Sharbaf described as feeling “desperate”.

She called on the authorities “to make it clear that the war and the security crises will soon end and the future is hopeful”.

"The government does not understand the needs of young people,” said Sharbaf, suggesting that in future the country could face a new wave of social unrest caused by disgruntled, disillusioned youth.