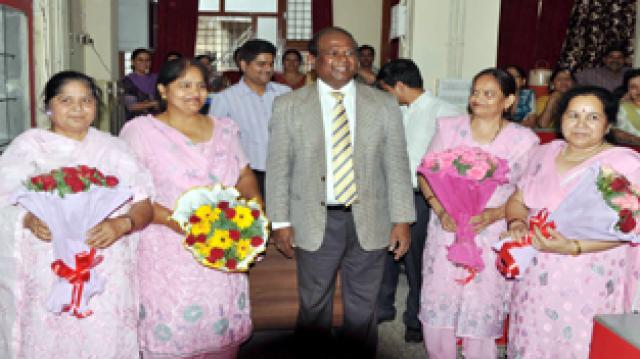 Jammu / Srinagar: Talking post office and about its services offered as on today sounds like day dreaming but it has been practically realized by none other than John Samuel, Chief Post Master J&K Postal circle. Those were the days witnessed by commoners when even after being lone medium of communication, people used disregard postal services on one or the other pretext. But now in Jammu and Kashmir every body has developed faith in postal services only because of John’s efforts in streamlining the organization. Empowering women folk exclusive women postal services in exclusive women post was started in state a few days ago. It was none other than John who accessed potential for sports and tourism in state and started working on project by organizing the events in this regard. To which tourism department has followed to achieve height of success.

From 1st September, 2012 the business hours of Srinagar GPO were extended up to 8 p.m. on week days. John Samuel in a bid to provide better and convenient services to the people of Srinagar took the decision and proved successful. Post Office also functions on Sundays and Holidays from 10 a.m. to 6 p.m. which is an added facility. John Samuel did not stop here as other employees or bureaucrats do after getting salaries in time, but started missionary move of ‘Post Shop’, Saffron Post and e-Post Services in customer friendly manner.

Mehraj Makhdoomi as a example for being extended recognition award for his commendable contribution and efforts, he was recommended for Dak Sewa Award for the year 2009. This was gesture by John for those who believe in honestly hard working.

“Chief Minister of our state should be like John Samuel and then only things would come on track” Vinod Sharma an employee said adding “in past experience of my 40 years of services I had never seen an officer working till 11 pm in night. Though it was not liked by people like as we had a routine to leave office at 5 pm but during his tenure time is no matter by the project in hand should be completed with sure success”.

Filed under: Business, World
Share Tweet Pin G Plus Email
previous article: Why I’m Voting NO Against the 2014 Budget for the Dobbs Ferry Free Union School
next article: Ways to Determine Retirement Readiness