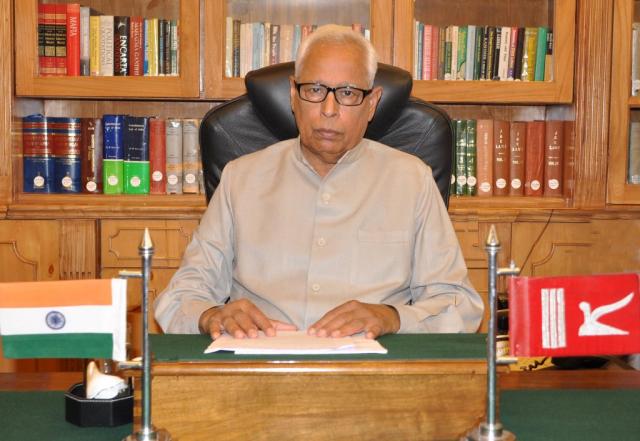 Srinagar, August 14 (Scoop News) –  N. N. Vohra, Governor Jammu and Kashmir, today said that while the process of normalisation is progressing well, the Security Forces and the State Police shall need to remain ever vigilant to ensure that terrorism and subversive activities are not allowed to rear their head again.

In a message on the eve of Independence Day, the Governor observed that while the environment may not have been completely rid of varied anti-national activities, 2011 marked the beginning of change. He said that recurring agitations and hartals had generated serious adverse consequences, particularly for the daily wage workers, whose families had to literally starve if normal activities were disrupted even for a single day, adding that the people at large, weary of their prolonged sufferings in the recent years, are now yearning for sustained peace and normalcy.

The Governor said that in the country’s march towards growth and development, the State of has not been able to remain on the forefront because of the serious difficulties and disturbances which our people had to encounter for nearly two decades. He observed that, thanks to the sacrifices made by the people of the State and the Security Forces, there has been a progressive decline in the incidence of terrorist and subversive activities, adding that we must pay homage to all those who laid down their lives to preserve the territorial integrity of our country.

The Governor observed that it is gratifying to note that while 2011 saw the revival of economic activities and tourism, the current year is marked by the restoration of a positive environment on almost all fronts. While the agricultural and industrial sectors are moving forward steadily, there has been a two-fold increase in the number of tourist arrivals as compared to that in the corresponding period last year. The Shri Mata Vaishno Deviji pilgrimage crossed the one crore mark in December 2011 and has been continuing to grow steadily in the current year. The pilgrimage to Shri Amarnathji Shrine, which symbolises the centuries old pluralistic practices and traditions of the people of , concluded earlier this month. This year’s successful Yatra, which is organised with the strong support and cooperation of the local people, witnessed the arrival of well over 6 lakh devotees from all over the country, he added.

The Governor said, “if the environment of normalcy is to be sustained the administrative system shall need to work with enhanced commitment and sustained zeal to ensure that all public services, particularly in the remote and unconnected areas, are delivered timely, efficiently and without any element of dishonesty, whatsoever. Several initiatives have been taken to enhance transparency in the functioning of public institutions. These need to be further strengthened and enlarged to eliminate corrupt practices and ensure that the ordinary person is well and timely served, on all fronts”.

Referring to the development scenario, the Governor said that the Annual Plan (2012-13) outlay, of Rs. 7300 crore, is the largest ever. Besides, there is an allocation of Rs. 700 crore under the Prime Minister’s Reconstruction Plan and very significant funding is available under the different Centrally Sponsored Schemes and programmes. He stressed that the various governmental departments and agencies must accept the challenge of ensuring that all available resources are utilised timely, efficiently and effectively, allowing no loss of funds or slippages of any kind, whatsoever.

Referring to the initiatives taken for tackling the unemployment problem, the Governor said that Government of India is providing technical and financial support for the implementation of several schemes for enabling the youth of the State to upgrade their skills and enhance their employability. The Central assistance includes a special scheme for providing 5000 scholarships every year, for five years, to the youth of the State for advancing their career prospects. A beginning has already been made to implement these schemes and a large number of unemployed youth are expected to secure gainful occupations in the coming time, he observed.

The Governor observed that besides causing enormous human and economic losses, the period of militancy had an extremely adverse affect on the functioning of educational institutions at all levels, from Primary Schools to Universities. Consequently, for nearly two decades, the bright boys and girls of this State were denied their rightful opportunities. He observed that it is a happy augury that the educational sector is once again resuming its erstwhile dynamism, adding that besides the establishment of two Central Universities, one at Jammu and another in Srinagar, there has been an upsurge in the establishment of new colleges and schools, both in the Government and private sectors. He observed that if the prescribed standards of teaching and learning are ensured, our youth has the potential of producing excellent results in all competitive arenas.

The Governor said that on the attainment of faced serious problems and challenges on various fronts, adding that it is a matter for pride and rejoicing that, over the past six and a half decades, our country has achieved significant growth and progress in different arenas of human and economic development. He observed that a matter for particular celebration is the attainment of self-sufficiency in the production of foodgrains. He said that today, when we celebrate our , we need to rededicate ourselves to protect and preserve the unity and integrity of our nation and work tirelessly to see that illiteracy, unemployment and poverty are forever banished from our country.

The Governor said that on the joyous occasion of our Independence Day, let us pay homage to all our great leaders who made enormous sacrifices and carried out a prolonged struggle for liberating our country from the foreign yoke. He reiterated his hope and prayer that all the political parties in the State, all socio-cultural and religious bodies, and all other stakeholders, shall join hands to determinedly work together for establishing sustained peace and normalcy and building a strong and prosperous Jammu and Kashmir.

The Governor wished  Omar Abdullah, Chief Minister, and all members of his Council of Ministers, continuing success in their endeavours to secure the rapid development of the State. He greeted the people of the State on this joyous occasion and wished all of them a very bright, prosperous and happy future.