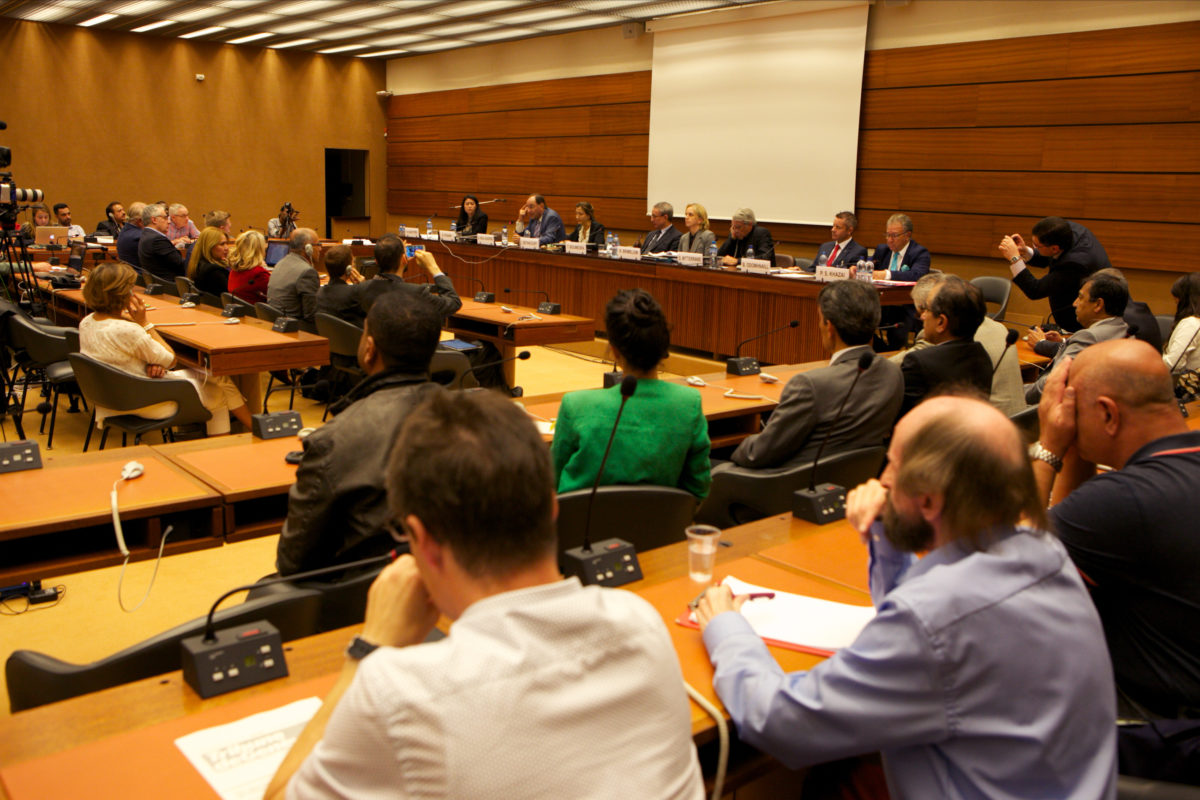 A joint statement was issued on 13 September by five NGOs with “U.N. consultative status” and five human rights organizations at the thirty-third session of the U.N. Human Rights Council condemning the 1988 massacre of an estimated 30,000 political prisoners by the Islamic Republic of Iran. 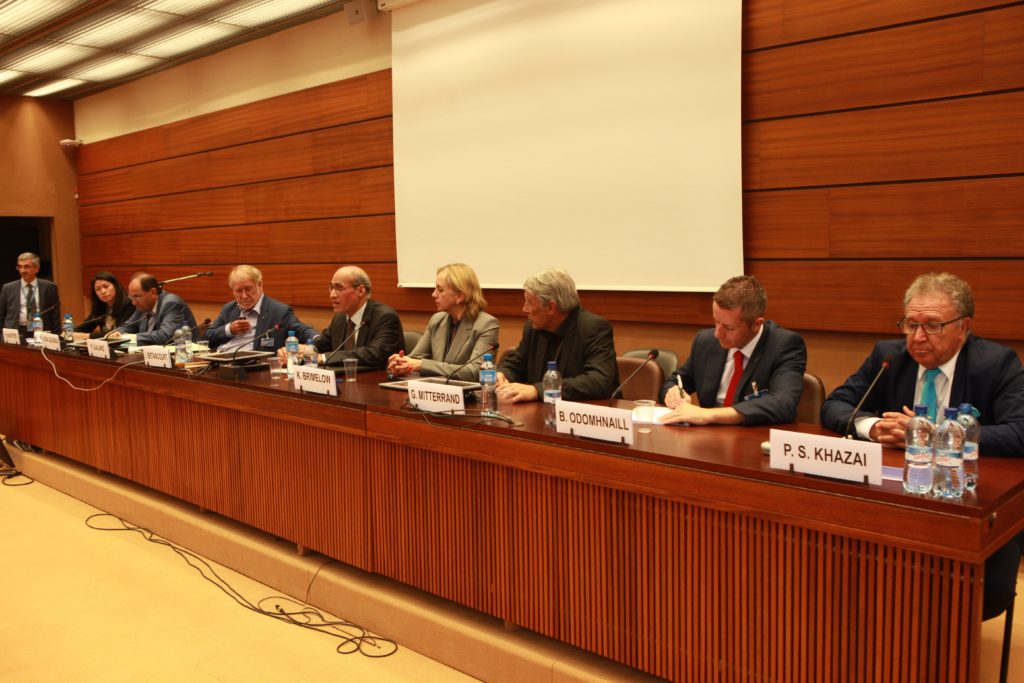 The statement, entitled “The massacre of 30,000 prisoners in Iran in 1988 constitutes a crime against humanity“, became an official document after being published by the council secretary.

The statement drew on recent information obtained from the publication of conversations between Hussein-Ali Montazeri, who, in 1988, was Ayatollah Khomeini’s apparent successor, and a “death council” consisting of high-ranking Iranian government officials in which the killing of the prisoners is discussed frankly. Although many details of the events were already known, the audio tape clarifies the extent to which Iran’s government was active and complicit in the killings.

“15-year-old girls and pregnant women were among those killed,” says Montazeri in the audio tape.

“In Shiite jurisprudence even if a woman is moharreb [waging war on God] she shouldn’t be executed. I told Khomeini this but he said no, execute the women too.”

“According to numerous reports,” the statement says, “the procedure of the death commissions was very simple. The first question was: ‘What is your political affiliation?’ Those who answered ‘Mojahedin’ [or PMOI, Iran’s main political opposition group] were sent to the gallows. The ‘correct’ answer was ‘Monafeqin’ (hypocrites, the derogatory term used by Iranian authorities to describe the PMOI).”

The statement also discusses the mass graves in which the bodies of the victims were deposed. The location of individual prisoners’ graves were not given to their families after their execution.

The statement quotes British barrister Geoffrey Robertson, head of the UN Special Court for Sierra Leone, who says that “in Iran, the prison massacres,

by virtue of their calculated cruelty designed by the political and judicial leaders of the state, are more reprehensible than their comparators… The two leaders who advised and implemented the 1988 massacres, Khamenei and Rafsanjani, are respectively Supreme Leader and Expediency Council head, and the Death Committee judges remain in judicial place. They deserve to be put on trial at an international court, of the kind that can only be established by the Security Council.” 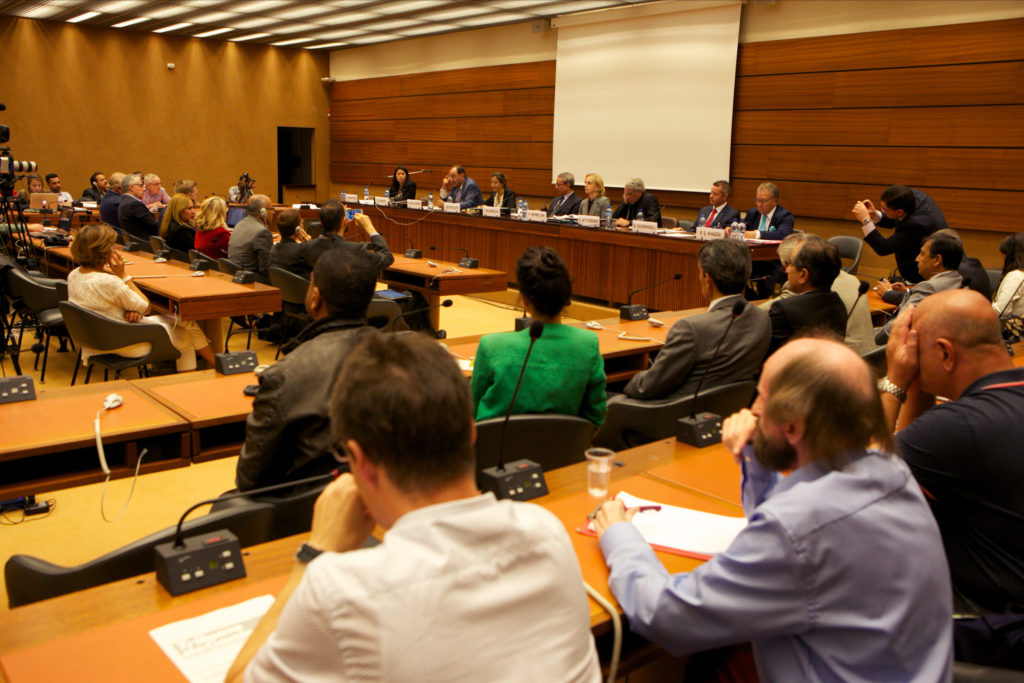 UN, Geneva 09/21/2016 – Formation of the Committee “Justice for the victims of the 1988 massacre Iran” announced at UN In Geneva. More than 30,000 political prisoners, mostly activists of the of the People’s Mojahedin Organization of Iran (PMOI), were massacred in a few months on 1988.

“What happened in Iranian prisons in 1988 remains a deep scar in the body and soul of the Iranian people,” the statement continues.

“The only way to soothe this wound would be a comprehensive investigation and identifying those who abused their power to execute thousands of their ideological opponents.

Although the killings occurred more than two decades ago, there is no statute of limitations in international courts for crimes against humanity. The statement urged the creation of an international criminal tribunal under the U.N. to prosecute those in power, including Mostafa Pour-Mohammadi, one of the architects of the plan and currently Justice Minister in President Hassan Rouhani’s cabinet.

Although the events in question happened years ago, the families of the victims are still actively seeking to find the location of their loved ones’ graves, and prosecution of those responsible is an important goal of Iran’s political resistance. Many are hoping that the publication of the Montazeri tape and the subsequent presentation of the cause before the U.N. Human Rights Council will provide the push needed to move the legal process of prosecuting those involved in the 1988 massacre to the next stage.