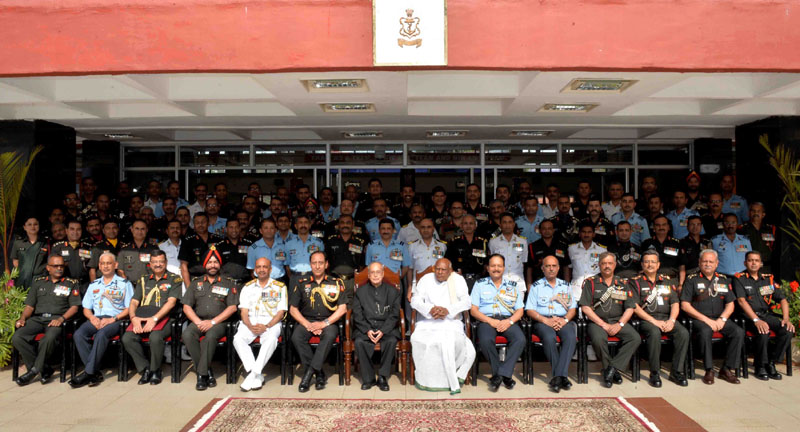 The President, Mr. Pranab Mukherjee at the convocation of Defence Services Staffs College (DSSC), at Wellington, in Tamil Nadu on April 15, 2016. The Governor of Tamil Nadu, Mr. Konijeti Rosaiah is also seen.

Deep Bonds Of Friendship Will Transform Into Everlasting Ties

Addressing the graduating officers, the President called upon them to effectively leverage the combat power of our forces, when the country requires them, as custodians of peace and security, to preserve the sovereignty, conforming to our national interests. As Supreme Commander of Armed Forces, he asked them to perform their duties with loyalty, distinction, steadfastness and patriotic fervour.

The President congratulated graduating officers from friendly foreign countries and expressed hope that the deep bonds of friendship and camaraderie they have forged will transform into everlasting ties of brotherhood between our nations.

The President said DSSC is a premier establishment which promotes the integrated functioning of the three services in a multi spectrum conflict environment. He said the training curriculum at this College seeks to instill jointness amongst our armed forces. The history of warfare bears testimony to the fact that ultimate victory in war will be achieved through jointness among the three Services.