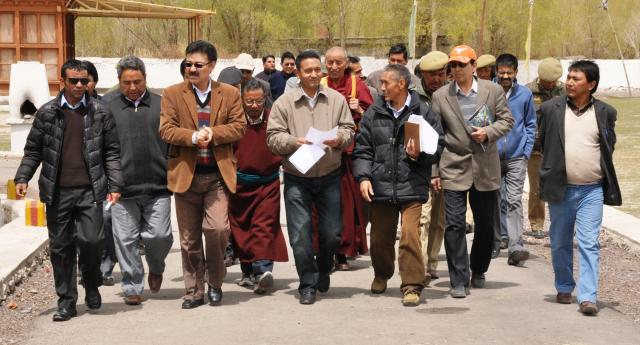 Leh, May 1 (Scoop News) -The J&K Urban Development Minister, Nawang Rigzin Jora and the Chief Executive Councilor, LAHDC Rigzin Spalbar along with a team of district officers and engineers today visited Jivetsal and took a detail review of the preparations in terms of infrastructure creation and development of the sermon place in view of finalization of Kalachakra sermon in July 2014 in Leh by His Holiness the Dalai Lama.

On the occasion, LBA President, Dr. Tondup Tsewang presented a charter of demands regarding development of Jivetsal in view of expected gathering of nearly 1.50 lacs devotees during the Kalachakra sermon and urged the Minister and CEC to initiate the development works in this working season to ensure its completion well in time. These works includes drainage facility at the sermon area, leveling of ground, construction of seating steps along the boundary walling, creation of steel crossings over the water channels, strengthening of protection bunds along Indus, installation of public toilets and urinals, electricity supply, public address systems etc.

Jora and Spalbar after making the detail assessment of the area directed the concerned engineers and officers to immediately make the cost estimates of the demanded works so as to arrange funds for execution of works. At the same time, the Minister and CEC gave instructions to the concerned departments to start the development works as soon as possible and ensure to complete maximum developmental works at Jivetsal by the end of this working season only. They assured that there would be no lapses on the part of Govt. as well as the LAHDC in the preparation of the arrangements for Kalachakra initiation.

Other issues like traffic regulation, diversion of vehicular movement, creation of parking space, arrangement of portable drinking water were also discussed in detail and gave directions to the concerned departments to do the needful well in time. They gave special emphasis not to install any toilets or urinals near to the Indus to keep the river completely free from contamination.