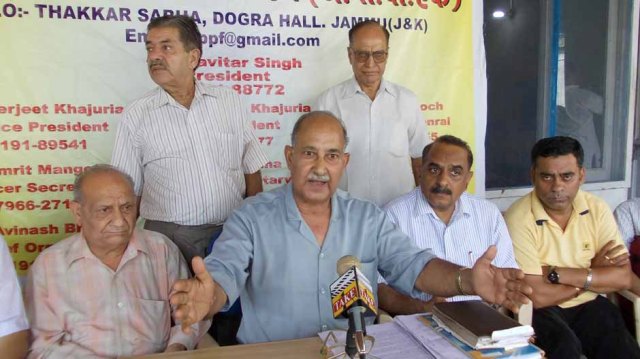 Jammu, August 18 (Scoop News)- Jammu Province People’s Forum (JPPF) an amalgam of more than 50 social, commercial and other organizations a united voice of the Jammu province had strongly opposed the voice of handful of separatist’s anti- national elements demanding winding up of Village Defense Committees. While addressing Press Conference the President Pavittar Singh Bhardwaj warned the secessionist forces to restrain from adding fuel to the fire at a time when the Jammu Province is already facing the brunt of communal rites in Kishtwar where the shops, business establishments and Hotels belonging to minority community stand raised to the ground or burnt completely. The resident’s sufferers are already facing curfew and are at the verge of starvation, sitting in open those to the hostile attitude of administration.

The minority community is sitting at the verge of mass exodus from Kishtwar and other adjoins areas who feel isolated. It is the strength of VDC in the villages and small pockets that the minority have managed to stay or they were bound to leave their homes and hearths in absence of any protective either life or properties.

The president warned the administration to think hundred times before the disbanding of VDCs. The JPPF will fight truth and nail against the nefarious design of separatists which is governing the administration nor only in Kashmir but is extending in Jammu as well.

Abolition of VDCs or any attempt to weaken their existence will lead to mass exodus of minority community from the Kashtwar / Bhaderwah once where they are feeling unsecure these days. It has already seen complained that the JK Police deployed in these minority ground areas is not behaving satisfactory rather terror sing the poor minorities community having a biased approach.

Filed under: News, World
Share Tweet Pin G Plus Email
previous article: “I am Sunny’s manager and my job is to keep her day organized”
next article: Victim compensation scheme framed as per Apex Court directions