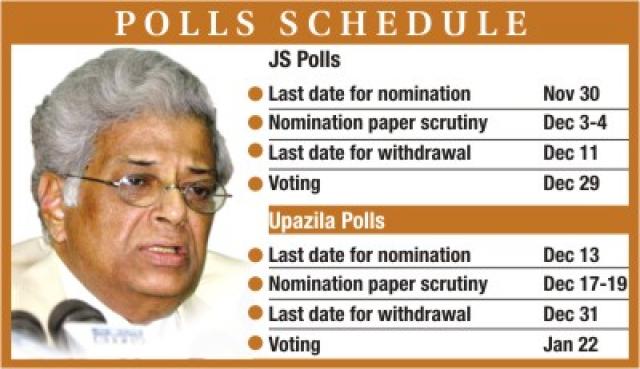 The long-awaited parliamentary election will now be held on December 29 and upazila on January 22, announced the Election Commission (EC) yesterday, meaning most likely an end to the impasse over the polls.

At a jam-packed press conference at the EC Secretariat in the evening, Chief Election Commissioner (CEC) ATM Shamsul Huda said hopefully the timings this time will be acceptable to all, and the political parties will begin full-fledged electoral activities today.

The new dates are the upshot of the last few days’ hectic negotiations between the EC, caretaker government and political parties.

This is the third revision to the polls schedules unveiled on November 2. Originally, the parliamentary election was to be held on December 18 and upazila on December 28.

According to the revised timetables, the closing date for filing candidacy applications in the national election is November 30 and in upazila polls December 13.

The applications for the parliamentary election will be scrutinised on December 3-4 and upazila on December 17-19.

The end date for withdrawing candidature from the parliamentary race is December 11 and from upazila election is December 31.

Terming the schedules a ‘reasonable solution’ to the stalemate, CEC Huda said there is no room for doubt or uncertainty over voting.

“We’ll do whatever it takes to hold free and fair elections,” he added.

The commission however did not meet the call from BNP and allies for scrapping of the provision that authorises it to cancel candidatures.

Citing the long and detailed procedure prescribed to revoke candidature, the polls chief said there is enough safeguard against abuse of the authority.

He observed that the EC should retain the power to resist electoral offences like snatching ballot papers and occupying polling stations.

The crisis over the ninth parliamentary polls arose when the BNP-led four-party alliance laid down a number of conditions for their participation.

An official of the EC Secretariat last night said Chief Adviser Fakhruddin Ahmed called the CEC and expressed satisfaction with the announcement. He also thanked the election commissioners for hammering out a ‘resolution of the stand-off’.

Before making the announcement, the EC sat separately with BNP and AL leaders again to make sure they agree on the election days, he added.

Earlier in the morning, the commissioners met the CA and discussed their plans, sources in the EC said.

In the fresh schedules, the EC has pretty much accepted the political parties’ demand for the upazila election to be delayed for a month.

The EC sources said the commission had to press the administration hard for deferral of the local polls for over three weeks, and lifting of the state of emergency after December 11, the deadline for withdrawing nominations in the general election.

The EC changed twice the dates in its original schedules for filing, scrutiny and withdrawal of nominations. The polling days were left unchanged on both occasions.

Still, its efforts towards all-party polls continued to falter with BNP sticking to their demands.

On November 17, BNP Chairperson Khaleda Zia issued a 48-hour ultimatum to the caretaker government to meet its four-point demand.

She demanded that the state of emergency be lifted, some ‘objectionable’ clauses in the Representation of the People Order done away with, upazila election deferred for a month, and the national polls be rescheduled so the hajis can cast their votes.

Things began to change for the better after the former prime minister announced Thursday that they would join the election provided it is held on December 28.

Filed under: Lifestyle, Politics
Share Tweet Pin G Plus Email
previous article: There will be few changes in the Team – MS Dhoni
next article: Having Sachin gives more options – Sehwag