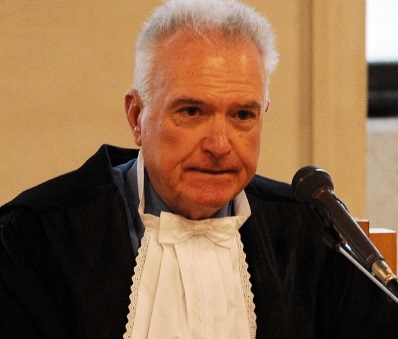 Appeals court Judge Claudio Pratillo Hellmann, is speaking out once again about the Italian Supreme Court’s decision to overturn his ruling in 2011 that declared Amanda Knox and Raffaele Sollecito innocent for the murder of Meredith Kercher in 2007.

The Italian Supreme Court overturned the acquittals of Knox and Sollecito in March of this year and ordered a new trial. At that time, during an interview with LaStampa, Hellmann suggested the high court ruling was not based on the actual facts. “The party of the Prosecutors had influence on the Supreme Court of Cassation” said Hellmann, adding “I expected that the decision of the Supreme Court would be the annulment and a new trial. The influence (party) of the prosecutors is very strong in the judiciary.”

Hellmann has now retired and says he is at peace with his decision. Hellmann has no doubt his court came to the right conclusion stating: “I want to see who will take responsibility of convicting two innocent people or at least I challenge anyone to demonstrate that there is evidence to convict them.” You can read his full interview with LaStampa here.

The high court released a motivation document on June 18 (You can view the Italian document here), detailing their decision to overturn Hellmann. Early reports state that the Italian Supreme Court faulted the appeals court for “multiple instances of deficiencies, contradictions and illogical” conclusions, ordering the appellate court in Florence to conduct a full examination of evidence to resolve the contradictions.

The high court disagrees with Hellmann’s conclusion that a lone attacker, Rudy Guede, killed Kercher. The court insists that the crime involves multiple attackers and their motivation gives specific instructions to the appellate court to “not only demonstrate the presence of the two suspects in the place of the crime, but to possibly outline the subjective position of Guede’s accomplices.”

Rudy Guede opted for a fast-track trial which was held separate from Knox and Sollecito. The multiple attacker theory, described as a sex game gone wrong, went unchallenged at Guede’s trial. The prosecution’s only concern was to secure Guede’s conviction. The evidence against him was irrefutable so there was no need for the prosecution to put any focus on other attackers.

Guede’s defense welcomed the multiple attacker theory because viewing Guede as an accomplice would lead to a lenient sentence. In Guede’s early statements he said Knox was not at the crime scene and mentioned nothing of Sollecito. When Guede came to realize that he could reduce his sentence, his story miraculously changed to include Knox and Sollecito. Guede’s revised version of events brought his life sentence of 30 years down to 24. The fast track trial knocked off another 1/3, leaving him with a drastically reduced sentence of 16 years.

When the Italian Supreme Court confirmed Guede’s conviction, they decided to wrongly lock themselves into the multiple attacker theory. The results of Guede’s trial should have been independent and should have had no bearing on their ruling in the Knox and Sollecito case.

Unlike Guede’s trial, the multiple attacker theory was debated heavily in the trial of Knox and Sollecito, because the topic was vital to both sides. The prosecution was unable to provide definitive proof to support their claims of a group attack. Dr. Lalli, the Coroner that performed the autopsy, was unable to say that there was clearly more than one attacker. Dr. Bacci, a medical examiner testifying for the prosecution, came the same conclusion stating: “The biological data cannot tell us if it was one or more persons who killed Meredith.”  Dr. Liviero, a police doctor testifying for the prosecution, stated: “a single attacker could have done it.” Dr. Torre, testifying for the defense, believed the evidence pointed to only one attacker and Dr. Cingolani, a forensic expert, also said one person could have been involved.

Retired Forensic Engineer Ron Hendry reviewed the evidence for Injustice in Perugia, concluding that: “Meredith Kercher was murdered in a sudden attack by a single perpetrator.” Retired FBI Agent Steve Moore also researched the case extensively and came to the same conclusion. In Moore’s article entitled “The Mountain of Missing Evidence,” he wrote: “With three alleged assailants, that would mean that 2/3 of the evidence is simply missing. Evidence of Rudy Guede’s presence and participation are everywhere; bloody footprints, DNA, fingerprints, palm prints, bodily fluids, hair and even fecal matter.  Nobody; not even Rudy Guede disputes this evidence.  How then can the total absence of evidence of any other person be explained?  The prosecution cannot provide an answer.”

The truth is the Italian Supreme Court has latched onto an unproven theory and refuses to let go. The high court scolded the Hellmann ruling for reaching a different conclusion, and has now instructed the appellate court in Florence to comply with their faulty logic.

Judge Hellmann discussed the recent developments with Oggi Magazine. “The Supreme Court judges in effect carried out a straight-legged tackle, Hellmann said. “They cannot do that and they should not have done that. They should have just limited themselves to the law. Instead they decided to interpret the evidence and that is a violation of the law. That is incorrect. They have delivered the Court of Assizes of Florence a judgment already ready-made, telling them what they must do in order to convict the two defendants.”

Hellmann’s observations present a disturbing overview of the Italian Supreme Court ruling. If Hellmann’s assessment is correct, the ruling appears to show an egregious abuse of power. Why would the high court instruct the appellate court on how they should rule on a case? Why even bother with the appellate level if the high court makes all the decisions anyway?

The Italian Supreme Court decision to overturn the acquittals of Knox and Sollecito will prolong the case for years. There is no doubt that the truth will forever be clouded in the process. This war between judges that has now developed will only work to further the uncertainty of any future rulings on the case. The damage in this case is irreparable. The system failed to bring justice to the murder victim and has created additional victims in the process.

The appeal trial for Knox and Sollecito is expected to begin sometime in the fall of 2013 in Florence. The ruling of the appellate court must then be confirmed by the Italian Supreme Court. Will the Florence court conduct a fair trial or simply comply with the unreasonable orders of the high court? If Knox and Sollecito are acquitted again, will the high court reject a second acquittal? Only time will tell.

The motivation document released by the Italian Supreme Court is currently being translated by volunteers of Injustice Anywhere. Please visit www.injusticeinperugia.org for updates.