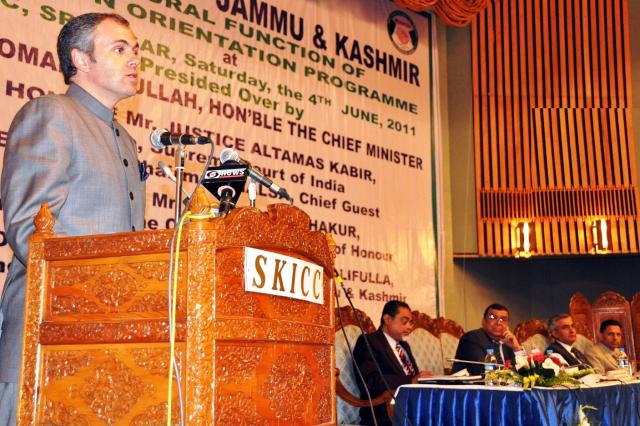 Srinagar, June 04  (Scoop News) –     J&K  Chief Minister, Omar Abdullah Saturday said that the judicious system in India is one of the best in the World and is highly respected, ‘but there is lot of criticism on account of long delays in the resolution of disputes in courts of law’.

Addressing the inaugural session of the ‘Mediation Orientation Programme’ for judges of Supreme Court and J&K High Court at SKICCin Srinagar , the Chief Minister said, “I believe that the great strength of this institution is the trust and the faith people at large repose in it. The degree of respect and public confidence enjoyed by the judiciary is not matched by many other institutions. Only a judicial culture which, in its texture, has social justice and human dignity woven in it can make the judicature functional and enable it to command the confidence and faith of millions”.

Omar advocated recourse to mediation and alternative dispute resolution options to help clear the large number of pending cases before the courts, and reduce the chances of appeals and revisions by the litigants.

Describing mediation and third party reference to settle the disputes an effective tool to decrease the pendency of cases, Omar Abdullah underlined the role of judges in the shift from traditional methods of resolving the disputes to modern inexpensive and fast track medium of mediation.

Omar said that justice now-a-days entails an immense sacrifice of time, money and talent besides emotionally draining the litigants.

“Judges have done a great job but the process has to be given an impetus to enable the course to fulfill the constitutional mandate of promoting and securing justice to all. The total number of pending cases in the country in different courts has exceeded 20 million. The tasks ahead are quite daunting. Hence, it is inevitable to have recourse to alternative disputes resolution mechanism including mediation”, he emphasized and said that resolution of issues through mediation is a win-win situation for both the litigating parties and also gives them satisfaction.

Omar said that this type of dispute resolution leaves least scope for appeals, resulting in decreasing burden on higher judicial forums. “It also allows the parties’ greater control over resolving the issues; encourages problem solving approaches and provides for more effective settlements”, he said. However, he added that the role of courts cannot be under estimated as the primary function of adjudication of disputes is to be discharged by the courts. He said emphasis must be to establish a culture of amicable solution of disputes weather at a post-litigation or pre-litigation stage.

“Law is a great instrument of change and we have to ensure that the system works according to the mandate of organic law of the country”, he said adding that the State Government has already given statutory recognition to mediation with the amendments made in the Civil Procedure Code in the year 2009.  “It has also taken every possible step for reduction of pendency of cases by improving judicial infrastructure, filling up of vacant posts and imparting training to judicial officers and public prosecutors. We have decided to have a network of courts in every district on the pattern of Gram Nyayalyas. Special and mobile courts are also on anvil in at least one in each district”, he said showing confidence that these initiatives will ensure speedy disposal of cases.

Omar also referred to the Lok Adalats being organized in the State regularly at various levels. He said awareness programmes are being conducted by the State Legal Service Authority throughout the State and schemes have been introduced for needy, indigent and poor litigants adding that ADR centres in each district has also begun in the State and State Litigation Policy is being finalized shortly.

Calling for collective approach to settle the cases, the Chief Minister said that the traditional system of adjudication through courts and the mediation mechanism must complement each other and act collectively to confront litigation in general and mounting arrears in particular. “This is necessary to come back the problem of pendency and ensure speedy disposal of cases”.

The Chief Minister expressed the hope that the deliberations at the conference will be fruitful and mark a new milestone in the march of achieving the goal. He said the development of mediation in holds enormous promise. He said the State judiciary strong enough to deliver in most difficult situations and it has proved so in recent times.

The session was also addressed by Justice Altamas Kabir, Justice T. S. Thakur and Justice F. M. Ibrahim Kalifullah. They highlighted the importance of mediation in the settlement of litigations amicably and speedily.

The Annual Report of Mediation Monitoring Committee of High Court of Jammu and was also released on the occasion.