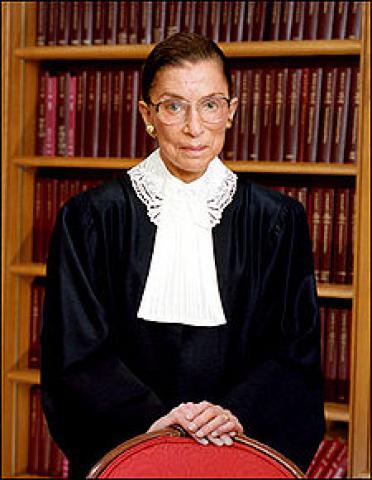 Recently, in addition to the nomination of self-described "transnationalist" Harold Koh, liberal constructionist and dean of Yale University, Justice Ruth Bader Ginsburg has been making the rounds of local colleges, universities and law schools with also her transnationalist views.

A "transnationalist" is the politically correct equivalent of a "globalist," and political correctness is a religion the transnationalists subscribe to wholeheartedly.  Except when it isn’t in accordance with their upside-down logic and world and global view.

A recent example of this would be Janet Napolitano, a woefully misled and misguided fellow lawyer whose "right wing extremist" memorandum trashes the American Bill of Rights on every level.

Recently, Justice Ginsburg had this to say about the place and reverence the U.S. Supreme Court should have with international courts and decisions in their findings:

“I frankly don’t understand all the brouhaha lately from Congress and even from some of my colleagues about referring to foreign law,” Justice Ginsburg said in her comments on Friday during a symposium at Ohio State University’s Moritz College of Law honoring her tenure on the nation’s highest court.

“There is perhaps a misunderstanding that when you refer to a decision of [foreign courts] that you are using those as binding precedent,” Mrs. Ginsberg said. “Why shouldn’t we look to the wisdom of a judge from abroad with at least as much ease as we would read a law review article from a professor?”

In fact, you hold your current lofty position due to the provision contained within that particular document.

The Justice is further on record as stating:

“The notion that it is improper to look beyond the borders of the United States in grappling with hard questions has a close kinship to the view of the U.S. Constitution as a document essentially frozen in time as of the date of its ratification,” Mrs. Ginsberg said in a speech four years ago.

“I am not a partisan of that view. U.S. jurists honor the Framers’ intent ‘to create a more perfect Union,’ I believe, if they read our Constitution as belonging to a global 21st century, not as fixed forever by 18th-century understandings.”

Really, Justice?  The framers faced far greater threats and dangers than we can even imagine in this high tech, obtain a warrant within minutes, era.  Far worse than global warming, Middle Eastern terrorists, or stock market variations.  They defended an entire Eastern Seaboard with only canon and musket, as I recall.   Defending it from the "international" community you so aligned yourself with.

And just in case you have forgotten or have not read it lately, there is a process within the Constitution in order to so amend it if need be to include any of those provisions they might have left out for 21st Century America.  And the Justices actually are not a part of that amendment process.

But since those founders held with "unalienable" rights as God given, I don’t think those have change much since the Magna Carta, which preceeded our Constitution by several hundred years.

And if you abridge with them, or alter them, the consequences in the increase of inmates now in our jails, a nation with the highest prison population now in the world, is telling in how far afield both the state and federal government have gone in not recognizing those "natural rights."

Another former Justice and fellow transnationalist, Sandra Day O’Connor, also is on record with a few comments on the place of international law in the highest court in the land at an awards dinner at the end of her career on the bench:

“I suspect that over time we will rely increasingly, or take notice at least increasingly, on international and foreign courts in examining domestic issues,” Mrs. O’Connor said, adding by doing so “may not only enrich our own country’s decisions, I think it may create that all important good impression.”

I don’t think the framers also were believers that making a good impression and impressing the rest of the world held much sway when it came to personal liberty, justice and freedom in this country.  In fact, wasn’t that what that first war was all about, severing this country’s ties to the laws and practices they found intolerable in Britain under "sovereign" law and nothing more than tyranny?

I won’t address in this article Justice Ginsburg dissenting opinion on the upholding by the Supreme Court of the partial birth abortion ban, except to state that she did seem to misunderstand that it is the procedure and timing of these "abortions" that is in dispute, and has nothing to do with a woman’s right to privacy, but ban a barbaric practice that has resulted in many women’s lives being compromised, or made sterile due to the actual procedure itself.

The majority of those groups which are fighting for the partial ban abortion statutes and laws are actually fighting for society, women their life and their health, not against it.

But you won’t convince Justice Ginsburg of that, or the other "transnationalists," who believe abortion at any stage in any manner should be an option and is just another method of birth control.  I wonder if the 19th century hangers will be brought back into vogue by the medical community?

But "transnationalists" have a world view and perception of law, liberty and justice unlike those of the framers and a great many in this country when it comes to our country, its place in the world, the Constitution and Bill of Rights across the lines.

Ms. O’Connor retired shortly after making her statement, before she completely forgot just what her role in government actually was.  Let’s hope soon Justice Ginsburg will do likewise.

"Do not separate text from historical background. If you do, you will have perverted and subverted the Constitution, which can only end in a distorted, bastardized form of illegitimate government."
James Madison