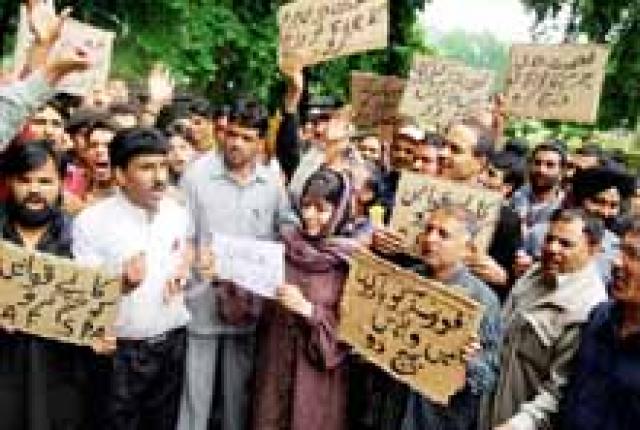 Srinagar, June 26  – A government spokesman, while commenting on the statement published in one particular section of the press regarding suspension of Dr. Nighat Shaheen, said that the government suspended  the police officers and two doctors on the basis of recommendation of Justice Jan Commission.

In case Dr. Nighat has any grievance, she is at liberty to bring it to the notice of the Commission, he added.

The spokesman reiterated that that the government is committed to uphold truth and deliver justice in a fair and transparent manner, without sparing any police or civil official who is found guilty, involved or negligent. All actions, so far taken, are on the basis of interim report submitted by the Jan Commission, he said

The spokesman further said that exemplary punishment will be given to the persons involved in the matter, irrespective of their connection or influence.

Meanwhile Specialist Doctors Association Kashmir in a statement has strongly condemned the suspension of two doctors for speaking truth regarding Shopian tragedy. We will suspend work in all hospitals of from next week after having meeting with all other Association of Doctors, SDAK said. They said that they will come on streets if the Government will not revoke this order with immediate effect.
SDAK said that Commissioner Secretary Health is looking from coloured glasses at the problem and trying to victimize those doctors who have no political backing. It said that Commissioner Secretary Health Atal Dulu in last summer burnt entire by issuing controversial land transfer order of Amarnath. “Instead of punishing him he was given price posting of Health and he has started victimizing doctors”, SDAK said. The Association said that Dr. Nighat Shaheen and Dr. Bilal were part of first and second team to give gynae opinion and examined the bodies of victims at Shopian. Dr. Nighat was first to confirm that Asiya and Nelofar was gang raped before murder.
Appealing Chief Minister Omar Abdullah not to fall prey to the machinations of bureaucrats especially like those of Mr. Atal Dulu, Doctors said that heads should roll from top and action should be taken against top brass and not against those doctors who basically brought truth to the surface regarding Shopian tragedy.