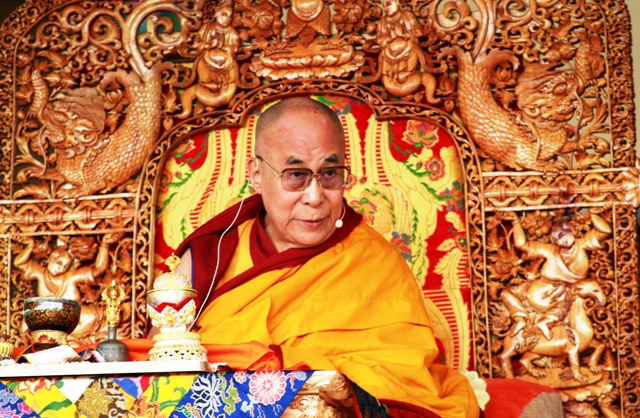 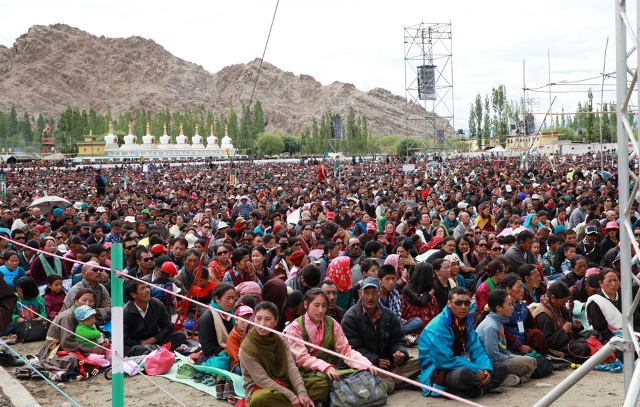 Leh(Ladakh), July 03 (Scoop News)- Buddhist spiritual leader the Dalai Lama today stressed on developing ‘compassion’ as the core and essence of Buddhist teaching without which even Kalachakra is meaningless.

As a prelude to main Kalachakra ceremony, Buddhist spiritual leader, the Dalai Lama today gave an introductory teaching following an elaborate ritualistic prayer by monks before a mammoth gathering of over 1,00,000 devotees from different parts of Ladakh, India and rest of the world at Jivetsal, Choglamsar.

One of the supreme instructions of Mahayana tradition of Tibetan Buddhism Kalachakra ceremony is being held in Ladakh for the second time after 1976 organized by Ladakh Buddhist Association (LBA).

Harboring kindness and respect in your heart for others naturally brings forth good speech and action effortlessly and thereby gaining others’ respect too,the spiritual leader said. In the beginning he explained that the aim of all religions is to gain happiness and be free from suffering, and in order to achieve so it is important to remove the cause which lies within us in the form of ‘I’. Unless this ‘I’ is reduced it is difficult to have clear heart and mind to develop compassion and patience as basic things needed to gain true happiness.

The Dalai Lama urged upon his devotees to make special effort to cleanse their hearts and minds towards transforming themselves into becoming good and warm hearted humans, during the coming two days, as groundwork before receiving the Kalachakra to make it truly meaningful that would help grasp the concept of Emptiness taught by Buddhism. He gave special verses to recite during the coming two days for this process of transforming ones heart.

The unprecedented arrangement of the 12-day event in short span of time by the LAHDC, Leh and district administration with thousands of volunteers led by LBA working day and night have visible impacts in terms of smooth regulations of the affairs in all respect.

Filed under: News, World
Share Tweet Pin G Plus Email
previous article: Who I am and Where I Live
next article: Understanding Teeth Whitening Lights