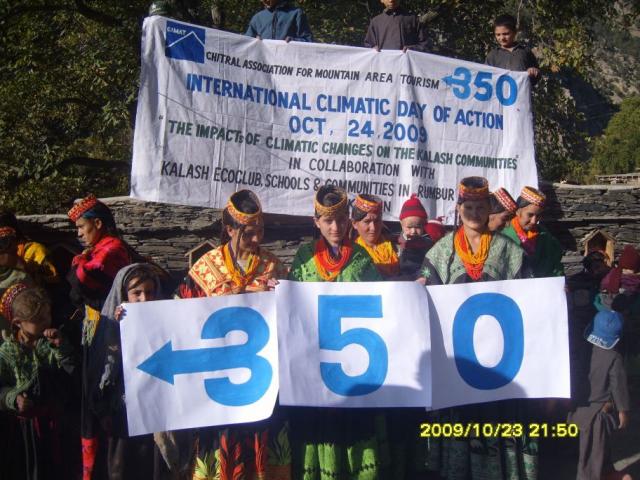 CAMAT [Chitral Association for Mountain Area Tourism] celebrated International Climate Day of Action, Oct 24, 2009 in the Kalash valley of Rumbor, district Chitral with a philosophy of ‘think globally, act locally’ in mind. The theme of the day was “The Impacts of Global Warming on the Kalash Communities”. Kalash ECOCLUB, school students, local leadership and woman representatives participated.

The day was observed in about 170 countries around the world aimed at awareness raising regarding the impacts of global warming on the natural environment and ecology that has already cast negative impacts on organisms living on the planet earth. The participants felt proud in being part of the noble cause being celebrated around the world on Oct 24.

In the meantime, they recorded their apprehension that the natural environment of the Kalash valleys—Rumbor, Burmborate and Birir—is certainly threatened due to climatic changes leading to longer summers, short autumns and short winters characterized by comparatively less snowfall and its early melting.

Mr Saifullah, the Kalash community leader and social activist, discussed the significance of natural environment, forest belt and alpine meadow for the traditional culture of the communities in the valleys. It was pointed out that the population of goat—the religious animal of Kalash—is declining over the years, largely because of the shrinking forest belts, degrading alpine meadows and disappearance of vegetative covers resultant of climatic changes stemming from what we know ‘global warming’. In part, the session raised concerns; the illegal trade by the timber mafia has done great damages to the environment of the valley. It is worth noting that during festival and funeral feast, as part of religious obligation, the Kalash people kill goats ranging from 30 to 100 according the strength of goat raised within the family concerned. Thus one of the core values of the Kalash culture that largely depends on healthy biodiversity and intact ecology has been potentially threatened because of global warming.

The frequency with which floods destroy cultivable lands, orchards, irrigational channels and the Kalash cemeteries have never been experienced in the past, which means ‘global warming’ has had started tightening its relentless grip on the otherwise pristine natural environment in the Kalash valleys as well as the entire Hindukush region.

To reduce the negative impacts of global warming on the Kalash valleys, the session passed the environmental-friendly agenda as follows:

1.     That government and NGOs in Chitral mandated with the protection of environment and natural forest belt must focus on the degrading environment conditions in the Kalash valleys. Afforestation need to be redoubled to this end.

2.     Tourists have to be sensitized towards the fragility of the valleys, the spring, streams and nullahs there. Pollution of non-biodegradable plastic bags have already had reduced the productivity of cultivable lands. Here the responsibilities lie with tour companies and guides, who have to make arrangement for this.

3.     The mafia involved in illegal smuggling of timbers from three Kalash valleys, have to be strictly monitored by the law enforcement agencies and forest department in particular at different exit points.

4.     Check dams need to be constructed in steep places where flooding is likely to erode the landscape. in such places has to be carried out on war footing.

5.     Local communities have to be the real owner and guardian of their resources. They should not look for the support of the so-called departments. Rather their life is inalienably linked to the valleys to where they are primary stakeholders and thus have major responsibility to look after forests, pastures and alpine meadows.

6.     Last, but not least, the less developed regions e.g. Kalash valleys, are quite neutral so far as carbon emission into the atmosphere matters but they still bear the brunt of pollution caused by the leading industrial cities at national and international level. Thus, big industries should have it as their moral responsibility to initiate green projects in places such as the Kalash valleys so that damages to the natural environment would be compensated.

At the end of the session, waste disposal campaign through the participants of the meeting was undertaken.