Main road of Kalash valley still block for the last one month for all type of vehicular traffic.
By: Gul Hamaad Farooqi
CHITRAL: Main road of Kalash valley has been damaged due to tremendous flood in the month of Holy Ramzn but due to apathy of Communication & Works (C&W) department the road is still block and people including women folk, children, ailing and patients are compelled to cross some one kilometers mountainous way by feet. As the road has been damaged last month due to tremendous flood and it was washed away by flash flood due to passing the road on the bank of Kalash River. Transporters also charging extra fare from passengers travelling within the limited distance. Due to no road people of the entire valley carrying their essential goods on the back of rented donkeys who charging 500 for 40 kilograms luggage. While some labor carrying these goods on their back and charge 300 per trip. No work was started on reconstruction of this road even passing 25 days and there is acute shortage of edible things at Kalash valleys including Rumbor, Bumborat and Shekhanandeh. Edible things having the price of 50 rupees per kilogram before damaging this road is now selling rupees 200 to 300 per kilogram and mostly nothing is available at these valleys. A local person Rahmat Ayub subadar retired said that we purchasing grain items on triple price and now that finished and people facing starvation. A large number of people including women folk, children, ailing, aged people and patients were seen crossing peak of the mountain by feet carrying their luggage on their back with great difficult way and travelling on a very dangerous narrow way via mountainous peak. A large number of people complained of C&W department that they not started rehabilitation work timely as a result people of the valleys facing great troubles.
Besides it hoteliers at Kalash valley complained that their hotels are close for the last one month because no tourist visit the valley due to blockage of main road. They said that we have only 6 months business seasons and if this period was passed without any tourist so they will be compelled to close their hotels. There is acute shortage of life saving drugs in the valleys hence the only Basic health unit at Bumborat which is running under Red Crescent society they carried medicines twice by feet. The annual religious festival of Kalash community Ochal (Ochao) was also badly disturbed because Kalash people could not came to Chitral bazaar for purchasing new cloth and other things. People of Kalash valley demanding from the government and high ups of C&W department for immediately repairing of the road to restore vehicular traffic on this road. Because a large number of vehicles have been strained at Rumber, Bumborat and Sheikhandeh. Main road has been damaged at so many places and local people have been carried this road at their property charging 50 rupees from each vehicle travelling only in a few kilometers which has been strained after flood and damaging of the road. In case of emergency it is not possible to rush critical patients or injured persons to Chitral hospital due to damaging of road and they might be faced to death. Government servants and students also badly suffering due to damaging of the only land route and they can not reach Chitral from the valley and vice versa.
G.H. Farooqi C/O Manager bank Islami Main branch Chitral phone No 0943-320737, 0943-316052, 0943-414418 , 03025989602, 03337069572, 03159698446, 03469002167
email: gulhamad@gmail.com 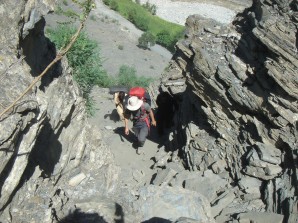 Filed under: Automotive, Business
Share Tweet Pin G Plus Email
previous article: Debra Milke – the lies of Jim Styers
next article: Woman on run after being accused of witch