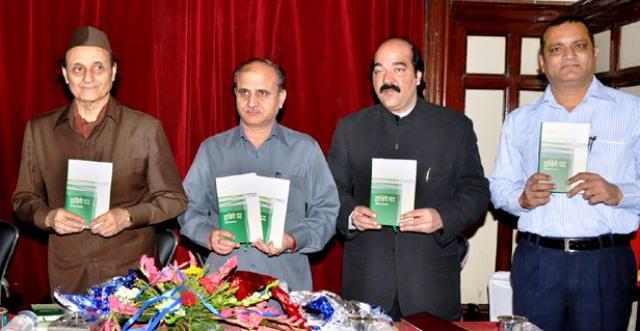 Appreciating  Singh for authoring a book on a most relevant topic, Dr. Karan Singh hoped that the literary piece will serve as a message for affirmative action.  He hoped that the author will continue to manage time for carrying forward literary pursuits along with performing his duties efficiently by striking a balance between the two.

The 161-page novel, on the theme of social life of the people of rural India living on the margins and facing many hardships in their day-to-day life, has been written by  Shailender Singh, a senior police officer, born in Chhamb village now in POK, presently a native of Jourian in Akhnoor. The preface of the novel has been written by the Dogri litterateurs, s. Padma Sachdev, while a special message commenting on the theme of the book has been penned by Dr. Kiran Bedi, the first woman IPS officer of the country.

Speaking on the occasion, Dr. Karan Singh called upon the younger generation to continue to learn and speak Dogri even though they might get their education in the English medium schools as the knowledge of as many languages as they can learn is a valuable asset for holistic personality development.

Referring to inclusion of Dogri in Eighth Schedule of the Constitution, Dr. Singh observed that this step is helping in a big way in promotion of this sweet and rich language of Dogras.

Congratulating  Shailender Singh for taking time out of his busy duty hours and writing his first book, Dr. Singh, in a lighter vein observed that, authoring a book by a police officer in Dogri seems to be a good omen for the promotion of this language.

In her introductory speech, Prof. Shashi Pathania, HOD Dogri Department, expressed her happiness that one more book has been added to the Dogri literature and hoped that  Shailender Singh would continue to enrich this language by writing more books in the coming years.

In his Vote of Thanks, the author of the novel,  Shailender Singh, dwelt on the aims and objects of writing this book and the need to establish a more harmonious society. He said that since entire thought of the novel was in Dogri and the story was area specific of Duggarland so he decided to write it in his mother tongue.