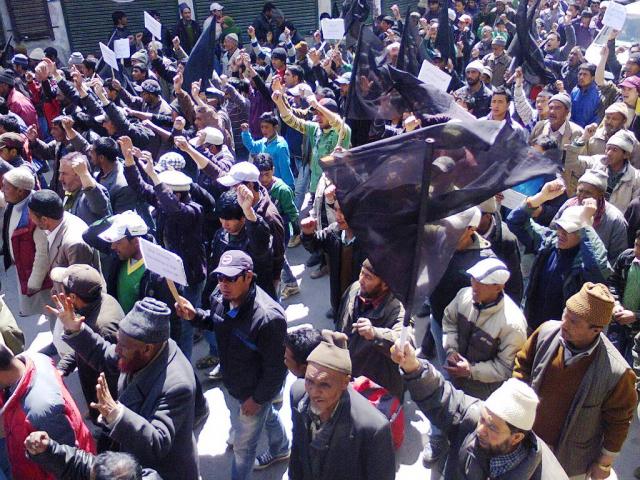 Kargil(Ladakh), April 14 (Scoop News) –Complete bandh (shut down) was observed today in Kargil  to protest against the bloodshed and massacres in Gilgit Baltistan

All the Shops and business establishments remained closed in Kargil town to express their solidarity with the people of Gilgit Baltistan.

On the occasion, religious scholars and leaders paid their condolence to the people of Gilgit Baltistan and the families of those who lost their family members during these massacres.

While speaking on behalf of Islamia School Kargil the Nayim Imam Jumma, Hujattul Islam Sheikh Hussain Mukaddas, appealed to the Government of India to  raise this issue in international forum and act as a representative of the people of Kargil.

He also appealed to the President of India to interfere in this issue and pressurize the Government of Pakistan to stop these killings.

Nayib Imam Jumma also appreciated the constitution of and the democratic government in and said that if cannot give protection to the people of occupied Gilgit Baltistan than hand them to they will remain safe in and is ready to accept them.

Murtaza Khalili while talking on behalf of the Youth Wing Islamia School Kargil, appealed to the Government of India to kindly save the life of its citizens who are in the occupied Gilgit Baltistan and pressurize on diplomatically to stop these killings..

He also appealed to  Indian media to give their contribution and play their role by highlighting the issue of Gilgit Baltistan killings.

He condemned the role of the so called free media of for being silent on this issue.