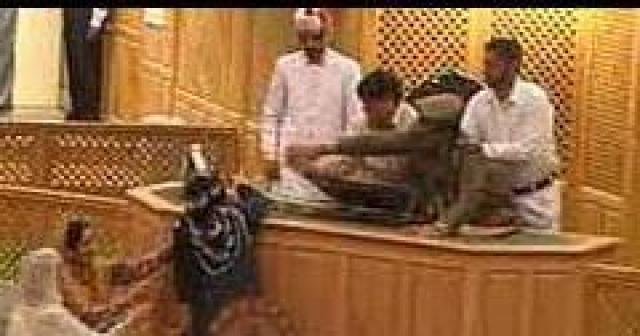 Srinagar, July 27 (Vijay Kumar) -– In spite of snatching of Jammu & Kashmir assembly Speaker’s Mike by PDP leader, Mehbooba Mufti, the obituary reference moved in the House in honour of six former MLAs and Members of Constituent Assembly was passed and rich tributes were paid to them.

The unprecedented kind of disruption caused due to snatching attempt at the time of obituary reference moved by the Speaker, was condemned by one and all. Even CPIM leader, M. Y. Tarigami disagreed with the behavior of the PDP.

Soon after the House started its business today, the PDP Members joined by Panthers party MLAs disrupted the proceedings and created ruckus. In the process, the PDP Members led by Mehbooba Mufti defying the Speakers directions to remain silent during obituary references, came into the well and snatched the mike from the Speaker’s table attempting to throw the same.

The attempt was, however, foiled when lady marshals escorted Mehbooba Mufti and the agitating members outside the House following direction by the Speaker.

Taking strong notice of unruly behavior, the Speaker said that House is the supreme constitutional body and its honour is required to be maintained at any cost. He said that all issues can be discussed and debated in a constitutional manner alone not by resorting to un-parliamentary behavior or browbeating the Speaker.

The Speaker also vowed to maintain complete impartiality, saying every MLA would be allowed to seek replies from the government through proper way. He cautioned MLAs against disrupting the proceedings in the House. “Nobody will be allowed to dishonor the House through indecent behavior”, he said adding every MLA must maintain proper decorum and decent behavior while participating in the Legislative business.

The Chief Minister Omar Abdulla while speaking on the occasion said that people of do not like indecent behavior. “If anybody has impression that they will earn recognition through this tactics, they are only befooling themselves”, he said. He said Speaker has already allowed all the questions and debates, through which any member can freely voice the public issues befitting democratic norms and parliamentary behavior.

“You cannot win elections or hearts of the people by disturbing proceedings, riding on desks and snatching mike and papers from the Speaker”, he said and added that the legislators should be the protectors of law and Assembly procedures. “The issues of whatever nature they wanted can be raised at the appropriate time during the session which is more than one month long”, he said.

Meanwhile Peoples Democratic Party president Mehbooba Mufti today reiterated her party’s resolve for resolution of the political, economic and administrative problems through democratic and peaceful means.
Speaking to the media after she and 20 PDP MLAs were marshaled out of the legislative assembly today, Mehbooba said the dictatorial methods of the National Conference or its partisan speaker cannot prevent the party from its duty towards the people of the state. The PDP president said the NC was trying to depoliticize the discourse on issue and reduce the scope of the state legislature to that of a municipal local body. We will resist this strategy tooth and nail
she said adding that the present House was the forum which had been elected by sixty percent people and it is here that peoples voice must get reflected
Mehbooba said the speaker after having blocked a democratic debate by disallowing PDP resolutions on a number of vital political and economic issues today again exposed his bias. The speaker in spite of allowing unlisted issues by BJP and ruling NC members on a day when
only obituary references were on the table refused to allow the PDP members to speak on the burning issue of human rights violations, she pointed out.

On the issue of the resolutions submitted by the party for discussion the PDP president said these had been raised by the party earlier at the Round Table conference with the prime minister and there could be nothing objectionable in debating them in the state assembly. The speaker had disallowed them only at the behest of the NC which was shying away from political issues after having sold out its autonomy resolution for power and was now trying to mislead people ondevelopment slogans. “No doubt developmental issues are important as well, but unless a holistic debate is held on all the dimensions of the problem we would be able to solve none” Mehbooba said and added our resolutions contained substantial economic issues like stipend to the unemployed and renegotiation of power projects with NHPC as well. A spokesman of the party later said instead of showing any semblance of neutrality or allowing PDP members to raise the issue, the speaker asked his staff to throw them out. Lacking any courtesy or civilized
conduct the speaker pinpointing to the leader of the largestopposition party asked the staff to “drag this lady out” the spokesman said, as if she was an intruder in the House.