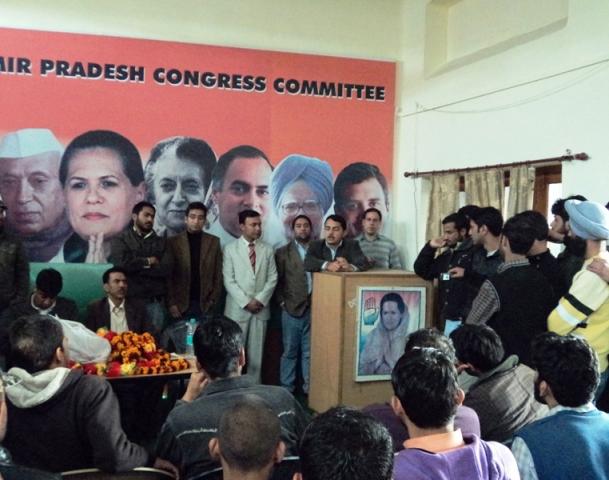 On the occasion Shoaib Lone, PYC President,   said that policies and programmes of Rahul Gandhi have attracted  the youth of   towards the party and they are pretty eager to fall in line with it. He further said that after joining of large number of leaders and activists of BJP the congress party will strengthen in Valley.

He appreciated efforts and endeavors of R. S. Pathania for his sterling performance in province as well as in Kashmir province whereby he has ensured join-in of such a large number of Youth Congress activists from into the Youth Congress fold.

Pathania said that J & K is an integral part of and no power on earth can snatch or even dream of dividing it. He called upon centre to put into play the model and style of governance as practiced by Maharaja Hari Singh and former P. M. Bakshi Ghulam Mohammad in J & K.

Farooq Ahmad Dar, pledged fullest support to Youth Congress and vowed to stand by it in times to come. He further said  that he like hundreds of other people are fed up with the divisive policies of Bhartiya janta Party and  said that the development and progress of the state is only possible under the banner of Congress party.

Abid Kashmiri and Manzur Hussain, senior Youth Congress leaders from Kashmir, complained of Youth Congress’s absence in . It is an open thing that Youth Congress has been politically invisible in . But with the recent join-in of spirited youth, it seems that now Youth Congress shall realize ground in Kashmir and shall act as spokesperson and propagator of Center’s standpoint on .