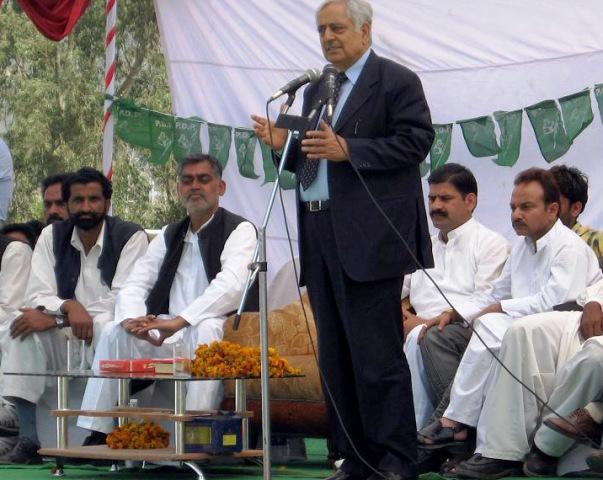 Peoples Democratic Party (PDP) patron and former Chief Minister Mufti Mohammad Sayeed on Thursday demanded that the State must be compensated for the losses suffered by it because of the discriminatory and arbitrary exploitation of its water resources by the National Hydro Power Corporation (NHPC).

Addressing series of election meetings at Thathri, Kahra and Gandoh areas of Kishtwar and Doda districts, Mufti said, “as per rough estimates the State has already been suffering a recurring loss of Rs 600 crore per annum because of discriminatory IWT treaty and the decision to hand major projects to the NHPC would further deprive of the State of its major natural resources”.

Demanding implementation of the recommendations of the Working Group headed by former RBI Governor C Rangarajan, Mufti regretted that Rangarajan, who headed the Working Group on Economic Reconstruction, has recommended that NHPC projects namely Dulhasti and Salal hydro electric projects should be handed over to Jammu and Kashmir government but no decision has been taken on these recommendations. "For making Jammu and Kashmir an economic viable and self sufficient state it is necessary to implement recommendations of the C. Rangarajan ", he said and regretted that despite having huge water resources the State has to depend upon Government of India for economic development.

“Even for the salaries of employees, our government has been approach Delhi”, he regretted but opined that Jammu and Kashmir would solve all its economic problems if water resources be exploited by the State itself.

Lambasting National Conference for surrendering water resources to the NHPC in 2000 against a paltry royalty of 12 percent electricity, Mufti said that this decision has further complicated the State’s economic distress. "I don’t think any state in the country would barter its resources in such a reckless manner as was done by the NC government by handing over seven power projects to NHPC under an arbitrary agreement signed by it with the Union Power Ministry on June 2000," he said and added that NC’s illogical surrender of the State’s water resources to the NHPC was another worst blow to its economy.

“It was only during PDP led government that a comprehensive policy was formulated for the development of these areas”, he said, adding, “immediately after taking over as the Chief Minister in 2002, our Government had devised and started implementing focused developmental strategies for the deprived sub-regions of the State to bring them out of the slumber”.  He said that foremost priority of his Government at that time was to give a sense of security to the people in these areas, but at same time people were also given relief through developmental initiatives.

Highlighting achievements of his government the former Chief Minister said that PDP led coalition regime has carved out a path of peace and equitable development in Jammu and Kashmir. He said that coalition regime has revived peoples’ faith in the democratic institutions. “Removing regional imbalance and creating atmosphere for initiating peace process was the remarkable achievement of PDP led coalition”, he said, adding, “ it was all due to the credibility of the PDP that previous NDA regime headed by Atal Behari Vajpayee and present UPA government led by Dr Manmohan Singh whole heartedly supported initiatives taken by us for restoring peace in this region", Mr Sayeed said and added that his party changed mindset of BJP leadership, while recalling the historic rally of then Prime Minister, Atal Behari Vajpayee at Kashmir on April 2003 when he had extended hands of friendship towards Pakistan at the time when tension was running high on borders.

Resorting peace and accelerating equitable development is the one and only agenda of PDP, he said and asserted that during the PDP led coalition regional imbalances were removed and equal treatment was given to all regions and sub-regions.

A prominent National Conference leader Tanbir Mintoo along with large number of his supporters joined PDP in the presence of Mufti Mohammad Sayeed at Thathri.