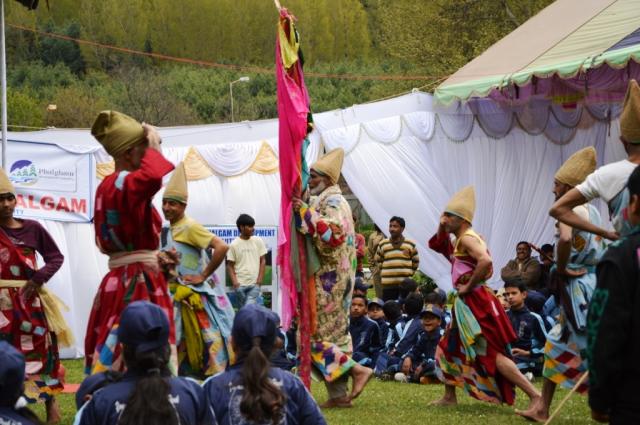 Prominent folk artists of Kashmir will perform distinguished specimen of local folk dance and music including Bhand Paether, Dhamali and Chhakri for which the Valley is widely known.

In his inaugural speech, Minister for Tourism highlighted the need for holding events like these to promote rich cultural heritage of the State. He said J&K has a glorious tradition which needs to be showcased in adequate manner. He said a detailed cultural bonanza has been planned at various tourist destinations that will go a long way in this direction. He reiterated his government’s commitment to ensure that tourists not only get to see the natural beauty of Kashmir but have glimpse of life and traditions of local people.

Speaking on the occasion, Secretary Academy, Khalid Bashir Ahmad said that holding of the cultural bonanza was inspired by Chief Minister Omar Abdullah to showcase rich cultural and folk heritage of Kashmir especially at places where a large number of domestic and foreign tourists visit. He said the weekly cultural events will continue for two months on different days of the week.

Giving details, the Secretary said that Pahalgam will host events on Saturdays, Gulmarg on Sundays, Zabarvan Park on Tuesdays, Kokernag and Achhabal on Wednesdays, Chinar Bagh on Thursdays and Verinag on Mondays. The concluding programme would be held at Verinag on July 5, 2013.

The highlight of today’s programme was scintillating performances by Baba Naseebuddin Gazi Dhamali Centre Akingam, Alamdar Bhagat Theatre Moripora, Anantnag and Ghulam Mohi-ud-din Shah Arbali and Party. The audience including a large number of tourists were spellbound by folk theatre and music numbers.

Pertinent to recall that Bhand Paether, a combination of play and dance, is Kashmir’s folk theatre known for highlighting social, political and environmental themes performed by a company of drummers, clowns and jesters. Dhambali is a devotional dance performed to invoke divine blessings on specific occasions while Chhakri is the most popular folk song of Kashmir played with traditional instruments like Tumbaknari, Rabab, Sarangi and Noat.

The second programme of the festival will be held at Gulmarg on Sunday.