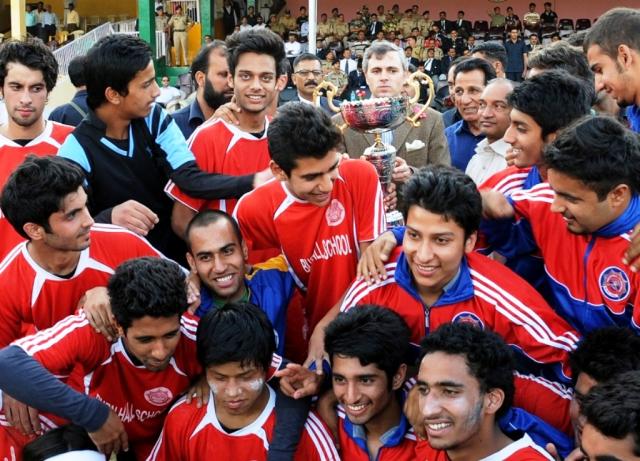 , September 16 (Scoop News)-    In a grand signification function, the Minister for Sports and Youth Affairs, and Chief Guest  R.S.Chib today gave away the prizes and trophies among the winning and runner up teams of Shaheed Aga Syed Mehadi Memorial T-20 final Cricket Tournament 2012 played at Sports Stadium Budgam.         Earlier, the Kashmir Gymkhana Cricket Club defeated RCC, Budgam by 42 runs in a tough final match played between the two strong teams. The Winning team gets a trophy and cash reward of Rs. 15,000 while Runner up team was awarded a trophy and cash reward of Rs. 10,000, besides Rs. 5,000/- for Man of the Series and Rs 3,700/- for Man of the Match.

Minster for Animal Husbandry and Information Technology  Aga Syed Ruhullah Mehdi was guest of honour on the occasion.

The Tournament was organized by Sheikh-ul-Alam Organization Budgam in collaboration with District Police Budgam.

Appreciating organizers for conducting of such kind of tournaments,  Chib said that these events will provide chances to the players to learn more techniques of the game and it also teaches discipline and spirit of unity. He said Chief Minister Omar led Government has taken several initiatives in boosting the sports activities in the State for sports liking youths.

Later,  Ruhullah thanked to all those players who played the tournament with utmost zeal and dedication to make this a successful and historical event.

Earlier, RCC Budgam won the toss and elected to field first. Kashmir Gymkhana scored a huge total of 183 runs in the stipulated 20 over but RCC Budgam was bundled at 141 runs in 18th over.

Meanwhile, 64 teams across the valley participated in this tournament.

Addressing the gathering, the Ministers said that the government has put in place the requisite infrastructure for the proper upliftment of various sports activities.

Additional Deputy Commissioner Budgam, SSP Budgam besides other senior officers and officials of the district and Youth services and sports departments and a huge gathering of spectators were present in the Stadium.