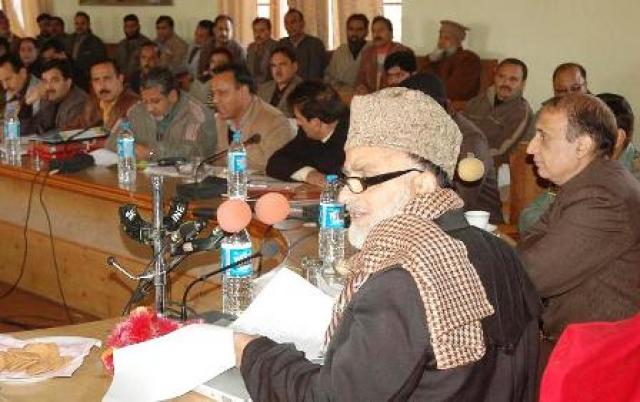 , November 21:(Vijay Kumar) —  Referring to the recent statement of the J&K Chief Minister, Omar Abdullaha, Minister for Rural Development, Law and Parliamentary Affairs Ali Mohd Sagar said that we believe that is not an economic problem but a political one, which can be resolved through the process of dialogue between various parties . He said that we have to take concrete measures to address this issue and in this regard National Conference will play role of facilitator.

He said that it is recorded history that National Conference has always resorted to people friendly measures so that the people of the state do not suffer viz-a-viz political, economical and developmental aspect. He said that it was due to tireless efforts of the late Sheikh Mohammad Abdullah that the lot of people living in even rural and far flung areas got economically lifted due to the historical Act of land to the tiller which in a way paved way for the upliftment of the land tillers who were otherwise subjected to inhuman and exploitative treatment by the big land holders.

The minister was accompanied by the Minister of State for Roads and Buildings Javid Ahmed Dar, MLA Sopore  Mohammad Ashraf Ganaie and senior leaders of the party.