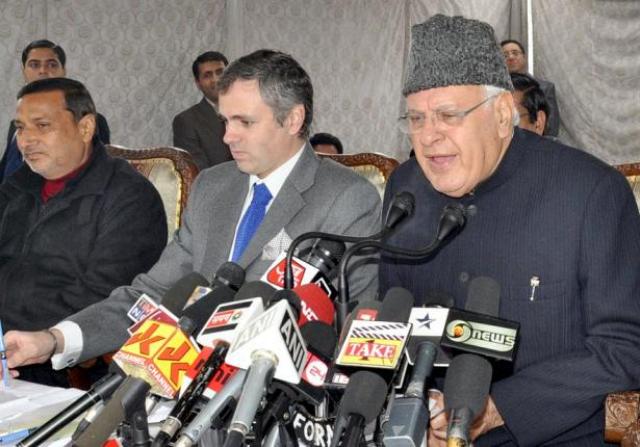 Jammu, January 05 (Scoop News)   Union Minister for New and Renewable Energy, Dr. Farooq Abdullah today said that the issues pertaining to Jammu and Kashmir have to be resolved by the people of Jammu, Kashmir and Ladakh through a dialogue process in which participation of people living across LoC is also required. He favoured the dialogue between and in this direction and stressed on building confidence and friendly ties between the two neighbours for the larger interests of peace and development in the State.

Dr Farooq said that the dialogue was only way forward to resolve all issues relating to the . “There is no other way forward”, he said and urged the Mirwaiz Moulvi Umar Farooq to initiate dialogue with the Union Government for settlement of issues.

In reply to a question pertaining to the views of Mirwaiz  regarding the failure of United Nation Organization in addressing Jammu and Kashmir issue, Dr. Farooq said that as a Union Minister he cannot comment upon it, however, as the President of National Conference he agrees with the views of Mirwaiz adding that the Organization despite being useful in so many ways at the global level has failed in resolving many issues.

Reciting the maxim ‘Dair aayad durust aayad’ (better late than never), Dr. Farooq Abdullah welcomed the statement of Prof. Abdul Gani Bhat and said that he has spoken the truth ultimately though lately.

The Union Minister spelt out his Ministry’s action plan for harnessing solar, wind, geo-thermal, water and biomass potential of the State for generating energy. He said his Ministry is keen to help the State to generate more and more energy from non-conventional energy sources abundantly available in the State. “This would relieve the pressure on the supply and availability of conventional electricity in the State”, he said.

Dr. Farooq said Union Ministry has provided Rs. 130 crores to the State this year for generation of solar energy and electrifying uncovered villages in remote areas. He said solar plants for 69 hospitals with a total capacity of 1090 kilowatts are being set up in the State at a cost of Rs. 30 crores. As many as 73 Gujjar and Bakerwal basties are being provided with 15150 solar lanterns while as solar power plant at Sher-e-Kashmir Agriculture University, Jammu is also being set up at a cost of Rs. 1.50 crore and 50 kilowatt solar power plant at Sher-e-Kashmir Cricket Stadium is also coming up at a cost of Rs. 1.13 crore.

The Union Minister said that under the remote village electrification programme of his ministry as many as 262 un-electrified villages and hamlets in the State are being electrified while 550 water mills and 1000 biogas plants besides 56 micro hydel programmes are in the pipe line. He said the Union Ministry has sanctioned 6 projects for Mata Vaishno Devi and intends to provide solar projects for Chrar-e-Sharief Shrine, Ragunath Mandir Jammu, Gurduwara Akhnoor and other places.

“My Ministry has asked the State Government to give proposal for energizing all the Government hospitals, Civil Secretariat and other office complexes under the solar energy programme so that the electricity saved in these institutions could be diverted to the local consumption”, he said.

Dr. Farooq said that the Government of India is tying up with the Government of Iceland in harnessing geo-thermal energy in a big way. “My Ministry intends to exploit potential of geo-thermal in Rajouri, Tatapani, Ladakh and other places in the State. We are also working for utilizing bio-mass for generation of electricity in the State”, he added.

The Union Minister said that his ministry has provided over Rs. 474 crores for the development of new and renewable energy projects in Leh and Kargil districts and he is shortly visiting there to inspect the pace of work on various schemes launched in this sector.