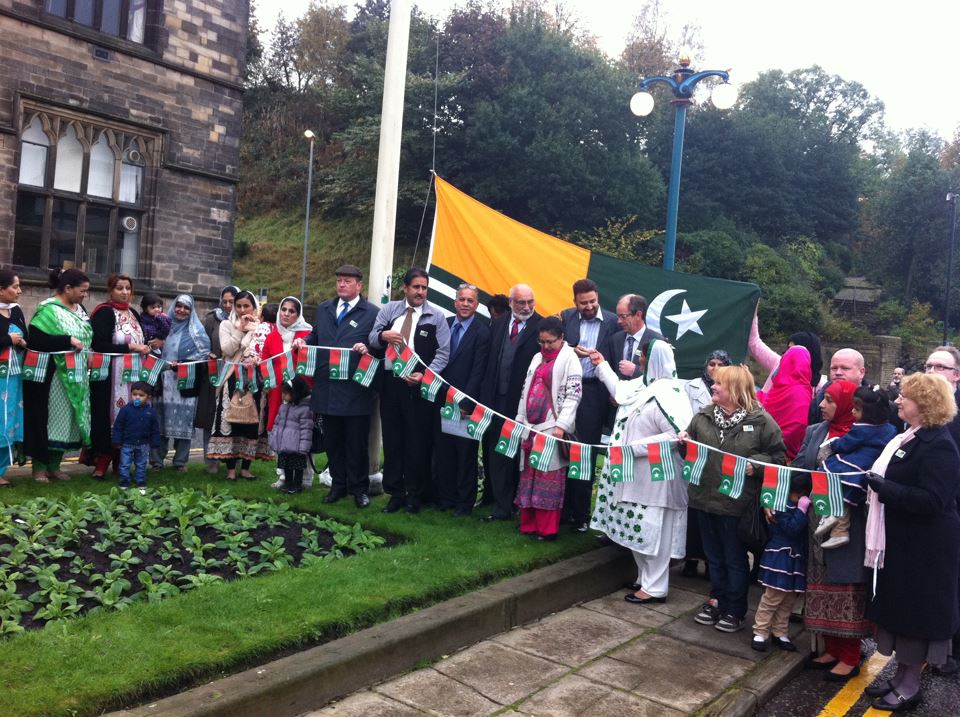 Members of the British Kashmir Diaspora Community celebrated Kashmir National Day on 24th October by hoisting   Kashmir flag in civic ceremonies at  Rochdale and Bradford Town Hall  and a special reception was hosted by Lord Mayor of Manchester to display Kashmir flag at Manchester Town Hall. Kashmiri community in Oldham and Luton celebrated National day and held Kashmir flag display ceremonies in their town Hall as part of ‘Kashmir History Week’ celebrations. British communities in solidarity with the people of Jammu and Kashmir  are displaying Kashmir Flag in their house, businesses and car windows. 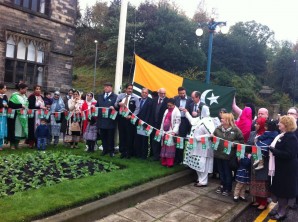 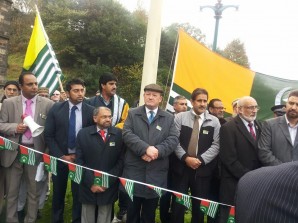 Kashmir Development Foundation (KDF) a national charity working for the empowerment of the ‘Voice’ of the Kashmiri diaspora community is leading on a campaign to celebrate ‘Kashmir National Day‘ on 24th October and ‘Kashmir History Week 20-27 October’ every year to advance the knowledge of the general public into the history and culture of Jammu and Kashmir and preservation of Kashmiri heritage in the United Kingdom.

Sardar Aftab Khan Executive Director of KDF said “I am thrilled that we have been successful in our campaign and a number of local authorities are formally supporting the celebration of ‘Kashmir National day’. There will be so much activity surrounding Kashmir National Day this year across England.  I’d like to thank Manchester City Council, Bradford City Council, Rochdale Metropolitan Borough Council and Oldham Borough Council for their tremendously positive response to our Campaign – they have been excellent partners and with them I hope we will reach many hundreds of people.  I’d also encourage all charities and public and private bodies to consider partnering with us next year to make ‘Kashmir National Day’ Celebrations even bigger and better.”

Haji Akram Sattar, Chairman of Kashmir Development Foundation has welcomed the support of Manchester City Council in organising special ceremony for Kashmir Flag display at the Town Hall by the Lord Mayor Cllr. Naeem-ul-Hassan JP. He said “Kashmiri diaspora community has demonstrated their unity in celebrating Kashmir National Day and we will continue to achieve more in future with the help and support of the community”. 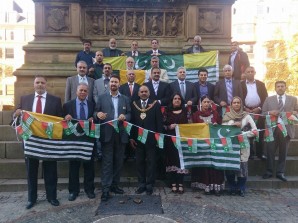 The Lord Mayor of Bradford Cllr. Khadim Hussain led the civic ceremony at the Bradford Town Hall and hoisted Kashmir flag. He said, “I am delighted to fly the flag of Kashmir at our Town Hall and I hope Kashmir National day celebrations would help in advancing the knowledge of the general public into the history and Culture of Kashmir”.

In Oldham Deputy leader of the Council Cllr Shoab Akhtar lead the Kashmir flag display ceremony. Cllr Javed Iqbal said, We are pleases to support Kashmir national day celebrations and would continue to support all communities in making Oldham a multicultural place and advancing community cohesion”.