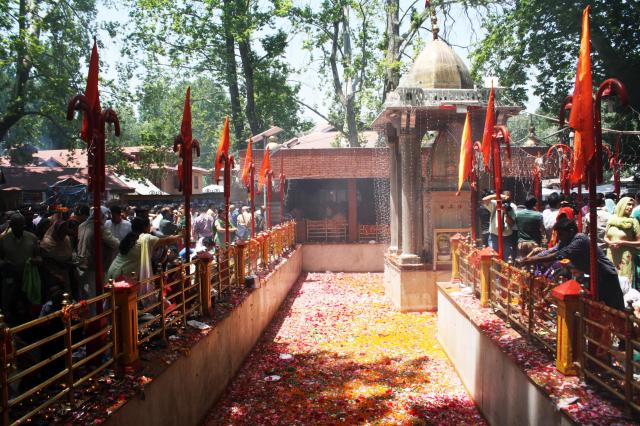 Tulmulla (Kashmir), May 29, 2012: Unprecedented rush of displaced Kashmiri Pandits and other devotees was witnessed at Khir Bhawani Tulmulla Kashmir Tuesday as mostly Kashmiri Pandits flocked the Kashmir valley to participate in the annual Mela at the shrine place. Set in scintillating beauty of Chinar trees Khir Bhawani Tulmulla has historically been an abode of reverence for Kashmiri Pandits but during the recent history the shrine place has proved instrumental indeed in bridging the mental and psychological gaps in the minds of KPs. It is this shrine which has played pivotal role, post 1990 exodus, in calling the Kashmiri Pandits back to Kashmir. Besides Khir Bhawani has been focal point in making the reunion of Kashmiri Pandits, spread far and wide, possible. For this being their sole motivation for their visit back to their native place, these people make it a point to visit the shrine on this auspicious day of Zaistha Ashthami.

Using private vehicles, taxis and state Government provided buses, thousands of devotees flocked to the shrine place and paid obeisance to Mata Khirbhawani, situated about 24 kms from from summer capital Srinagar city towards its north-east direction in Tulmulla village of Gan­derbal district of Kashmir province.

It is during the “Zaisth Ashthami” that a Mela gets underway every year when thousands of devotees from far-off places come here in large numbers for offering prayers and having the Divine Darshan of Devi Khir Bhawani. Because of the unfortunate exodus of the Kashmiri Pan­dits the number of Yatris declined in the subsequent years. How­ever due to the changing circumstances the number of pilgrims coming the Holy Shrine has appreciably increased in the past few years.

Rare scenes of Hindu-Muslim brotherhood were witnessed as locals in Tullamulla village served milk in earthen pots to the Pandits, keeping up the centuries old local tradition. The Kheer Bhawani is an example of the communal amity between Hindus and Muslims in the Valley as the latter take an active part in making arrangements every year. The Muslim brethren who wanted to meet their old time friends were seen searching for them at the shrine premises.

Elaborate security arrangements had been made by the authorities as most devotees arriving at the shrine were Hindus who had left the Kashmir Valley in the early 1990s with the outbreak of separatist violence.

For the very reason of encouraging dialogue and removing trust deficit between the two communities and reviving the age-old kashmiriyat of composite culture that the government of the state is also encouraging this form of tourism by providing convenient transportation besides arranging for the lodging facilities at the shrine place. The inducement of a desire in the hearts of the exiled Kashmiri Pandits to revisit their motherland-the valley of their dreams would be, perhaps, one great reason which might, in due course of time, change the direction of the current of history by allowing the men­tal and psychological gaps get bridged which, in turn, thereby, might reverse the exodus.

This is perhaps the only mystical spring in the world where the color of spring keeps on miraculously changing which is ascribed as the manifestation of the Goddess, serving as an advance signal about what is going to happen in the near future. The light green, milky, pink colours of the spring are suggestive of the auspicious omen while as the black is indicative of some inauspicious future happening. In Kashmir these changes are taken for granted as Devi Kher Bhawani’s indications of the future course of events.

Before entering the Shrine premises the devotees take a Holy dip in the Gang-Khi. Devotees do “Parikrama” of the Holy Jai Kund. They gather in front of the Holy kund along with the “Pooja Sami­gri” for prayers as per the conventions and immerse in the Holy Jai Kund water, Milk, Sugar, Badam, Mishri, Kishmish, flower Petals and Lotus Flowers as their "Shradha-Suman”. As these flower petals gather along with the other “Pooja-Samigri” on the surface of the Kund it looks like a “Divya Darshan” and this float­ing splendor looks like a “Devi-Prasad”. Devotees do “Samohik ­Arti” by lighting the earthen Ghee lamps and by singing the praise of the Devine Mother and seek to get merged themselves in "Adi-Shakti-Saroopas Divinity.

Meanwhile Jammu and Kashmir Chief Minister Omar Abdullah also paid obeisance at the shrine and interacted with the devotees who gathered around to speak to him.

On this occasion Omar Abdullah said Kashmiri Pandits are integral part of the culture and ethos of Kashmir and Kashmiriyat. He said that their return to the Valley is the cherished goal and desire of the government and the civil society.

Omar maintained that the gradual improvement in the security situation and generation of economic avenues for this community would give required boost to the endeavours of the government to achieve this goal.

The Chief Minister said that a sense of security and economic safeguards were the basic elements which will help in return of Kashmiri Pandits to their native land.

"Before bringing back Kashmiri Pandits, we have to instill a sense of security in them. We are making all our efforts in this direction," Omar told reporters after visiting the Kheer Bhawani temple here, 27 kms from Srinagar.

He said economic package in the shape of employment to the youth of the Kashmiri Pandits in the Valley is an important step to help return of these families.

While the atmosphere of peace and security is gaining ground gradually and the state government has implemented half of the employment package for Kashmiri Pandits, the situation is becoming more and more palatable for their return, he added.

The Chief Minister said the state government is taking up the issue of enhancing financial support to Kashmiri Pandits to enable them construct their residential houses in the Valley.

He said the remarkable increase registered in the number of Kashmiri Pandits visiting Kheer Bhawani during last few years is an encouraging phenomenon.

"Government would continue to work to improve the facilities for the large number of devotees visiting Kheer Bhawani," he added.