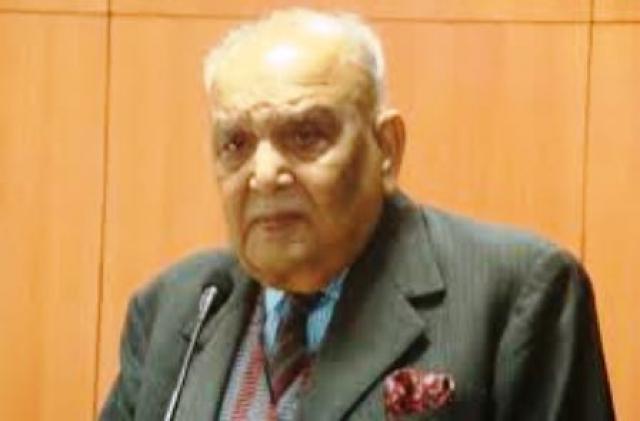 Delivering Dr K K Sinha memorial lecture at on ‘The Kashmir Problem And The Way Ahead’ this afternoon, Lt Gen Sinha said, “We may agree to accept the LOC as international border but no other concession need be made.”

The General observed that had no road map for resolving the Kashmir issue, beyond reiterating that Kashmir is an integral part of and a settlement will be reached through dialogue.

Referring to the scourge of terrorism, he said it had to be crushed militarily. He said the Indian Army’s record of upholding human rights is far superior to that of Pakistan Army in erstwhile East Pakistan and now in Baluchistan or for that matter of the US Army in , and .

Generous economic development in the face of Jehadi fanaticism, as has been the experience of the in and and ours in , has little

Talking of the past, General Sinha brought out that secularism in Kashmir stood for Kashmiriyat, a valued tradition of from the medieval period. Kashmiris overnight voluntarily and peacefully converted to Islam, a religion of peace. Sheikh Noorudin, the patron saint of was called Nund Rishi by the Hindus. He was revered equally by both Hindus and Muslims like Kabir and preceded the latter. Although both Kashmiri Hindus and Muslims are non-vegetarian, the Sufi saints of were strict vegetarians. Till 1947 Quran Shareef was taught to Kashmiri Muslims by Kasmiri Pandits also, he added.

During the Partition holocaust, he said, when the whole of including region was aflame with communal violence, there was no communal tension or violence in . The slogan of the people was “Hamlewar Khabardar Ham Kashmiri Hindu Muslim Sikh Tayar.” When Pakistani forces were indulging in rapine and plunder in Baramulla Maqbool Sherwani trying to protect the Hindus and Sikhs from plunder and rapine. Pakistanis crucified him. Decades later, another Maqbool, Maqbool Bhat

started mayhem and murder in . This was the beginning of terrorism in , he maintained.

General Sinha traced his association with Kashmir from Day One, 27 October 1947 when Indian troops were flown to to rescue Kashmir to his completing his five year tenure as Governor of Assam, traced past history, present situation in while suggesting measures to resolve this long festering problem. He mentioned Kashmir’s old association with . Ashoka the Great of Pataliputra laid the foundation of the city of two millennia ago. Yusuf Shah the last indigenous King of Kashmir displaced by the Mughals lies buried in . It is also pertinent that the first Prime Minister of Independent India, Jawaharlal Nehru was of Kashmiri origin.

The Indian Independence Act passed by the British Parliament stipulated that the ruler of Princely States and not their people will decide on accede accession to either India or Pakistan. Maharaja Hari Singh could not make up his mind and wanted time to take a decision. He entered into a Standstill Agreement with but Jinnah was impatient and after eight weeks launched the invasion of on 22 Octobe. By the 25th Kashmir State Army was routed after putting up a brave defence. lay defenceless. In this desperate situation the Maharaja wrote a letter to seeking immediate intervention by the Indian Army to save Kashmir, enclosing a signed Instrument of Accession which was exactly the same for all Princely States in or .