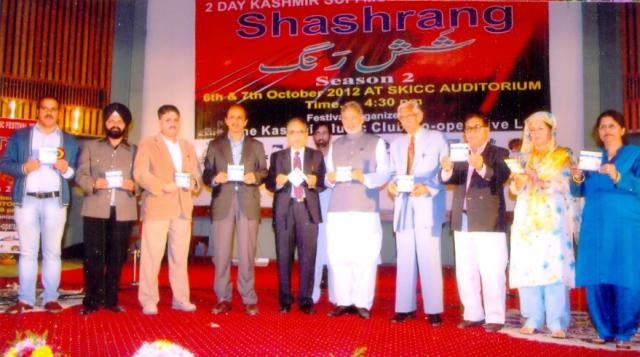 Srinagar, October 08 (Scoop News) –   Concluding function of a 2-day Kashmir Sufi Music Festival Shasnrang (Season-2) was held at SKICC here today in which Minister for Finance,  A. R. Rather and Minister of State for Tourism,  Nasir Aslam Wani attended the function as Chief Guest and guest of honour respectively.

On the occasion four artists of high repute namely Ustad Mohammad Abdullah Saitari, Waheed Jeelani, Abdul Rashid Hafiz and Sheikh Mohammad Yaqoob were awarded by the Ministers. The awardees were earlier felicitated by ALL India Radio as well. A CD containing songs by Gyan Peeth Awardee Prof. Rehman Rahi and composed by Waheed Jeelani under the supervision of Secretary Academy of Art, Culture and languages,  Khalid Bashir was released under the title ‘’Tymber-i- phulai’’ by the dignitaries on the occasion. The songs have been sung by Neeraj Pandit, Shazia Basheer and Waheed Jeelani.