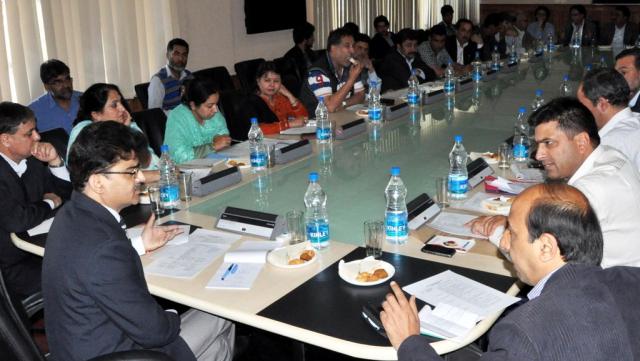 Srinagar, May 9 (Scoop News) –Commissioner Secretary, Tourism and Culture, Atul Dullo Wednesday said that Tourism is a tool for the economic development of both urban,rural areas and to boost the sector, state government contemplates to organize a chain of activities during current season.

As a part of the programme the Department of Tourism, Kashmir is organizing Tourist Festival of Kashmir from 14th May to 29th May, 2013 during which various activities will be held at famous Tourist Spots including Kashmir Haat, aimed at attracting large number of tourists and showcasing the handicrafts and other products of Kashmir.

Commissioner/ Secretary was addressing a meeting of officers, tour operators and hoteliers, convened to review the arrangements being made to organize Festival of Kashmir on the scheduled dates.

Dullo said that the Festival spread over two weeks is first of its kind in which the State and Central Governments will jointly provide funds besides, private partners like Tour Operators, Hoteliers, Houseboat owners and other agencies related to tourism sector shall play a vital role in making the festival a success.

Earlier, Director Tourism, Kashmir, Talat Pervez apprised the meeting about the steps taken by Tourism Department Kashmir to involve all the stakeholders to participate in this economy boosting activity of Kashmir Valley, ‘the Paradise on earth’.

Giving details of the Festival, Mr Dullo said that the inaugural function will be held at Kashmir Haat on14th May and Minister for Tourism  G. A. Mir will be the Chief Guest on the occasion. Minister of State for Tourism  Sajjad Ahmad Kichloo and Secretary Tourism Government of India  ParvezDewan will be Guests of Honour.

He said that besides presentation of cultural bonanza, exhibition stalls will be set up to showcase various products of Art and Craft of Kashmir, horticulture produce, Agro based food products, Floral pictures, pictures of wildlife of Kashmir, Fish biotic life, Traditional Kashmiri Art, Clothing, Musical instruments, Kashmiri cuisine and live demo of preparation of Kashmiri cuisine.

He said that on 15thMay, famous Qawal, Sabri brothers will present Qawali at SKICC, followed by Photography exhibition, Trekking Expedition at Zabarwan on days of the festival.

Students of various colleges will take part in debates, to be held at different locations on the title, “Tourism as a Tool for Economic Development of Rural areas”, during the festival, Dullo added.

He further said River rafting, Para-gliding, Horse Race, E-gaming will be special attractions of the festival and the valedictory function of the festival will be held on May 29 at SKICC, in which dignitaries of the state as well as of other states will participate.