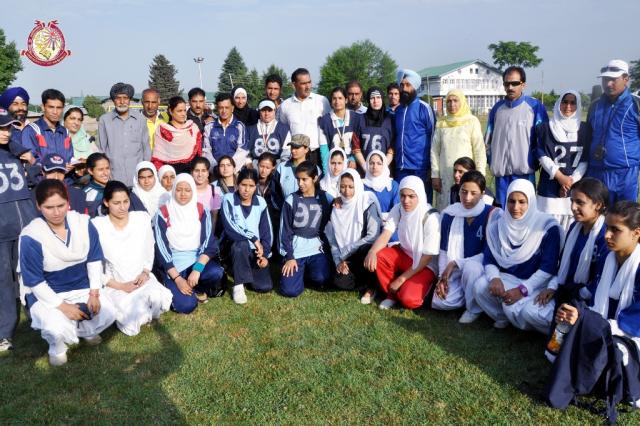 Srinagar, May 26 (Scoop News) –      In continuation to its Four Race Series the Directorate of Physical Education, Kashmir University organized the last Inter-College Cycle Race for Women from Kralsangri (Nishat) to University Main Gate via Foreshore today in which forty top women cyclists of different Colleges and Post-Graduate Departments of university of kashmir  took part.

The race was flagged off by the Director Sports, Prof  N.A. Rather. Due to high traffic inflow on Boulevard the organizers had to take extra precautions for the safety of the cyclists.

The first three position winners were awarded Gold, Silver and Bronze medals while, first ten position winners were awarded the certificate of Merit by Prof. Nisar. After accomplishing the race  in 14.04 minutes Quratul Ain of  womens college MA road WC, MA Road lifted the title for her College, while two other girls of the same College, Ulfat Jan and Sapna Kumari won Silver and Bronze medals after completing the race in 14.20 and 14.35 minutes respectively. WC, won five positions out of the first ten positions and brought laurels for their College.

Speaking on the occassion  Prof. Nisar expressed his gratitude for J&K Health Department, J&K Traffic Police, Physical Directors of different College and different Units of the University for extending their full support and cooperation in making the series of Road events a grand success. It may not have been possible to conduct these sporting events so successfully without their assistance, Prof Nisar said Meanwhile, the Inter-Department Cricket match for men is in progress at University Campus and some more Inter-Department activities are in the offing.

Filed under: Sports, World
Share Tweet Pin G Plus Email
previous article: PHILIPPINES After Aquino will a Marcos be running for President in 2016?
next article: The Meaning of Obama’s Victory to the Afro-Americans!