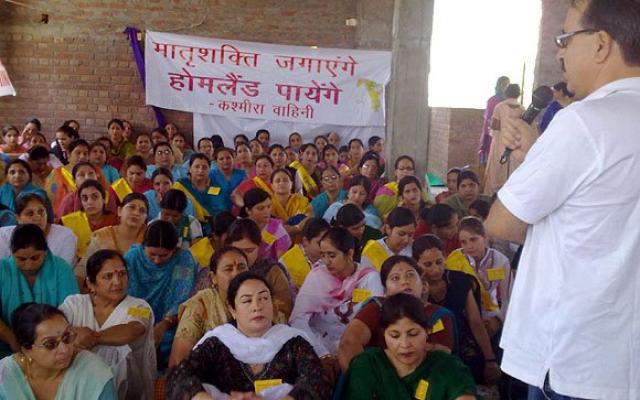 Jammu, December 20 (Scoop News)   – Eminent theatre personality Asha Zaroo has been selected for the Vitasta Sukanya Samman for her four decades of immense contribution to Kashmiri theatre, Radio and Television besides immensely contributing to exile consciousness of K.P community throughout her work.

The “Nirnayak Mandal” of Kashmira Vahini, women wing of Panun Kashmir, presided over by its Patron Kirti Kalla in consultation with the select committee, appointed by Kashmira Vahini for conferring the “1st Vitista Sukanya Samman” decided to honour eminent theatre personality Asha Zaroo with “1st Vitasta Sukanya Samman for 2010”,said in a statement.

Statement said that the select committee received more than two dozen nominations from the community across the globe for K.P women who have excelled in the fields of Art, literature, science, medicine, theatre, journalism, social work and management.

Dr. Khema Koul, National spokesperson of Kashmira Vahini on the occasion elucidated the immense contribution of K.P women in the fields of art, literature, theatre, politics and philosophy from thousands of years. In the modern times and in the exile, Kashmiri Pandit women have proved themselves in varied fields, be it science or humanities

Sunita Santoshi, General Secretary Kashmira Vahini and Sudesha Kaul, Programme Co-ordinator informed the meeting that about 700 women delegates from Jammu and other parts of country will take part in the conference and will present papers on different issues confronting Kashmiri Pandit Women in exile.

The other Kashmira Vahini members who participated in the meeting were Nirmala Tikoo, Vijay Saproo, Smt. Gayatri Hashia and Sunaina.