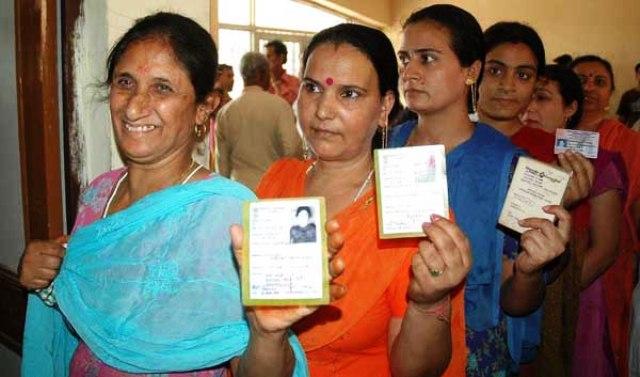 Jammu,May 13  – Among 5,888 registered Kashmiri Pandit migrant voters for Baramulla Parliamentary constituency, young voters took a lead today in coming out of their homes to exercise their franchise at the 12 polling stations set up for them here.

Long queues of electors were seen outside all major polling stations right from word go. In spite of soaring mercury, the queues multiplied as the day progressed, reflecting tremendous enthusiasm among migrant electors to choose their representative at the Centre.

Beating all previous trends, youth power was in full display this time with several young boys and girls proudly coming to polling stations displaying their voter identities. First- time voter, Mr. Rinku Raina, 20, was the first to cast his vote at the polling station at Director, School Education, , Muthi Camp. When asked about his enthusiasm, he said, “We have to take the initiative for bringing about good governance and root out corruption”.

At the same polling station, many first-time voters like Ms. Ritika Sadhu, 19 and Mr. Vivek Bali waited eagerly for their turn to cast their ballot. While Vivek claimed his vote to be for employment, Ritika talked about the problems faced by migrants after leaving the Valley, hoping that the new government will come out with some plan to ensure their return to their native place.

An elderly woman, Mrs. Piyari Koul, was brought to the polling station at Barnai by her grandson, Mr. Sumit and granddaughter Ms. Priyanka, both first-time voters.