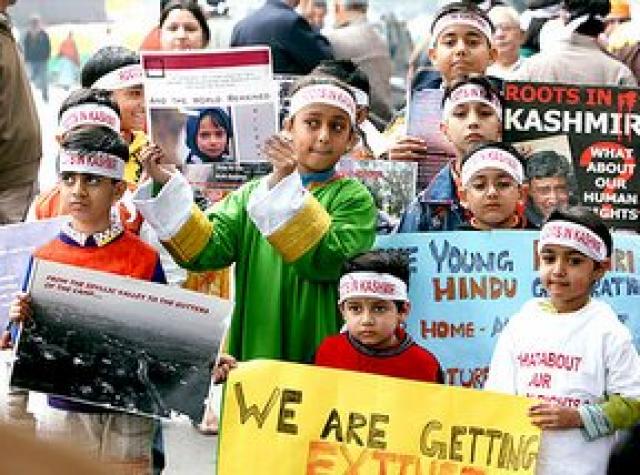 In a joint statement the KP leaders of  Panun Kashmir(Agnisheker), All India Kashmiri Samaj and Roots in Kashmir, appreciate the efforts made by KPSS in trying to carve out an identity, preserve its distinct culture and their efforts to strive in a hostile environment. It is a pity that they invite civil society including separatists to take note of the state of their desecrated and destroyed religious places while the separatists use this as a platform for spitting venom against the Pandit community, while doing nothing to protect and preserve the religious shrines of the minority Hindus. It is an irony that men who should be serving sentences and sent to gallows are today exploiting the pitiable situation of the 3000 odd Kashmiri Pandits left in the valley.

Statement said, we take strong exception to the statement issued by terrorist and rapist Yasin Malik wherein he has said that the “temples will come back to life when Pandits come back”. This reveals the sickness that the man is suffering from. It shows the mindset of an unrepentant killer who after killing, kidnapping, raping and money laundering is now trying to grab platform of the hapless Pandits left in the valley. Instead of criticizing those who desecrated, destroyed and encroached the temples of Hindus, he is playing his usual dirty politics.

Leaders said, we maintain that people like him, Bitta Karate, Ishfaq Majid Wani, Javed Nalka and their JKLF was responsible for killings of killings of hundreds of Kashmiri Pandits and the terrorists like him have no space in a civic society. We exhort Kashmiri Muslims to show some courage and determination to throw out such rotten eggs. It is a shame that separatist leaders have never demanded the persecution of people responsible for KP deaths and exodus.

KP leaders in a statement said, he idea of the Pandits based in the valley was to showcase how certain members of the majority community have destroyed their sacred religious places but all that they got to hear from the separatists was the usual bunkum that –We want Pandits back, they were sent out as a part of the conspiracy, anyone who destroys temples is not a Muslim. The attitude of denial of the part of the separatists has already led them to a point where they are virtually reduced to marginalized fringe groups. It seems that they are now looking for new platforms to get back some of their “lost glory”, the statement said.

KP leaders said, we as Pandits understand the pain and suffering of our Pandit brethren who have been neglected by the State and the Centre much like their counterparts who were forced to leave the valley and stay in camps in Jammu, but to give adjectives to rabble rousers and mobsters like Syed Ali Shah Geelani is like praying to a Devil. We must not forget the speeches of Geelani wherein he has clearly mentioned that will get Azaadi Barai Islam-Freedom via Islam. What is equally true is that the attitude of successive State Governments has forced Pandits to look for other options to redress their pain should serve as a wake up call to the Omar Abdullah who promised that Pandits will be taken care of under his rule. It should also wake up the Centre because the miniscule Pandit community has always upheld its being Indians and that has led to their sufferings.