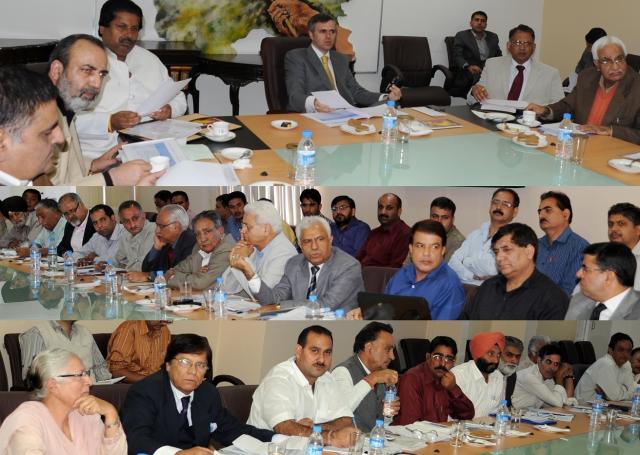 Srinagar, September 18 (Scoop News) –    Chief Minister, Omar Abdullah Tuesday said that his government would do whatever possible to facilitate return and rehabilitation of Kashmiri migrants describing them integral part of the society in the Valley. He said that there is a need to create conducive and palatable atmosphere for large scale return of the migrants adding that the appointed of Kashmiri migrant youth under Prime Minister’s Package in the Valley and their stay here has paved the way in this direction.

“Till the time return of migrants takes place smoothly all facilities need to be provided to them at the migrant township and other places in ”, Omar said maintaining that his government has already recommended enhancement of cash assistance to the migrant families from present ceiling of Rs. 5000 to Rs. 10000 per family per month to the Union Government.

Chairing the Apex Advisory Committee meeting of Kashmir migrants here this afternoon, the Chief Minister approved conversion of 588 one room tenements at Purkhoo in two-room dwelling units to accommodate equal number of most deserving and needy migrant families. A proposal to this effect put forth by the Relief and Rehabilitation Department in the meeting involves an expenditure of about Rs. 8.43 crores.

The Chief Minister directed for taking immediate action for transfer of recently completed Jagti Water Supply Scheme at a cost of Rs. 15.19 crores to the PHE Department for its operation to ensure regular and up to the mark water supply to a population of about 25000 in . He asked the Chief Secretary to take appropriate action in this regard.

Omar Abdullah asked the Relief and Rehabilitation Department to take up the issue of providing permanent drivers for the four ambulances earmarked for meeting primary healthcare requirements at the migrant township and other places.

The Chief Minister gave nod to the construction of 160 shops on the pattern of self-financing for the shopkeepers who have shifted to Jagti from Purkhoo and other locations and as such, lost livelihood means. “Need for construction of such shops at other places where migrants are residing in two room tenements should also be ascertained and proposal formulated accordingly”, he added.

Speaking in the meeting Minister for Revenue and Rehabilitation Raman Bhalla gave resume of the measures government has taken to ensure better living conditions at Jagti and other places where Kashmiri migrants are residing.

The Minister said that under the directions of the Chief Minister, the government has accorded sanction to the relaxation of upper age limit prescribed for entry into government service by 3 years as one time exception in favour of Kashmiri migrants to facilitate recruitment of eligible candidates against available vacancies caused due to de-reservation of posts and also due to non-joining of selected candidates under Prime Minister’s package.

Bhalla said that process for making online cash payment to the migrant families as advised by the Chief Minister in the last Apex Advisory Committee meeting has been initiated and the migrants presently having accounts in non-nationalized banks are being persuaded to open their accounts in the nearest nationalized banks so as to facilitate making online payments to them.

He said that under the directions of the Chief Minister the Kashmir Darshan for school going migrant children born after 1990 have been conducted recently from 1st to 8th September adding that 41 boys and girls belonging to migrant families who had not visited the Valley so far availed the opportunity to tour various parts of Kashmir.

At the start of the meeting the Revenue Minister mentioned about the sad demise of Apex Advisory Committee Member  Amar Nath Vashnavi and the participants of the meeting expressed sympathy with the bereaved family and prayed for peace to the departed soul.